Yesterday I was chatting with an older co-worker about movies. He asked if I'd seen "Gary the Rabid Dog." I laughed--thought, Wow this guy has some eclectic tastes--and said I hadn't.

Now, to give some context, we were in a minivan on the freeway and there were four co-workers chatting in the back, so the ambient noise level was high. Also, we'd just commented on how much we hated movie snobs, so I was reluctant to self-identify as a snob.

My movie-fan co-worker continued to talk about this movie, how original it was, that it starred Klaus Kinski, and I realized very belatedly that he had asked me if I'd seen "Aguirre, The Wrath of God."

I admitted to him, apologetically, that I'd misheard. I've seen Aguirre. It's a hard movie to forget. And I still think "Gary the Rabid Dog" has potential.
at February 28, 2009 No comments:

This is apropros of nothing, but could there be anything grosser than a chocolate chip bagel?
I mean, why?
I ate one at work by accident, and the combination of slightly sour bagel dough with chocolate-flavored nibs was so unexpected and awful, that I had to spit it out.
================================
On to much weightier topics. Ha.
Out walking the dog yesterday, I passed by an older gentleman ambling along with a little white terrier.
If you don't know this already, older gentlemen with little dogs are always going to stop and talk.
It's a fact. A law of nature. Like gravity.
I wasn't in the mood for an extended conversation, but I slowed and said hello, hoping it would be brief.
The man greeted me and the dog as if we were old friends. (We have said hello once.) He enquired about my dog's breed, energy level, name--laughing heartily that in English, his name means "garlic"--and peppered in asides about his own obviously beloved Marie-Louise. The dogs sniffed each other, playfully batted forelegs, conducted further, more intrusive sniffing, then stood looking in opposite directions, clearly over it.
But the older gentleman was on a talkative roll.
*
There's a moment in conversations where you know that you've crossed over from dialogue to monologue. You realize this and lose all hope, not just for the chat, but for your plans in general, your need to be elsewhere. It's that moment where your conversational partner has made the assessment, intentional or not, that you are not a human being worthy of attention, but rather a receptacle, a disembodied ear into which all manner of rants and claims may be poured.
I got a hint of this yesterday as the older gentleman soliloquized about an acquaintance in Mexico, and her extra-tall husband, and their children named Olivia and Max, and had he mentioned how much he loved Mexican food--
*
I started to edge away, but my dog was sprawled across the pavement as though tucked in for a nap.
The government is corrupt! the older gentleman cried. The American government is the most corrupt in the entire world.
Mayday, mayday. Corrupt government? This was Hyde Park material. I looked down at my comatose dog, who normally hauls at the leash as though the world's largest squirrel is lurking just around the next corner.
Corruption, the old man insisted, gleeful.
We have to be off. Have a great morning, I said, with a determined smile. My dog jumped up, yawning.
The old man said, only a little deflated, his eyes invisible behind dark glasses, Good-bye Mr. Garlic.
at February 22, 2009 No comments:

Street art snaps as an antidote to social anxiety 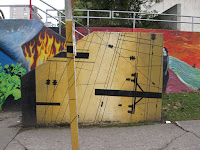 Here are 2 snapshots from that tunnel o'graffiti I returned to last week.
They are almost left brain/right brain pieces of art.
The top one feels rational and measured and planned, a play on telephone lines, with even the stop sign painted to blend into the overall work.
The bottom one has a more joyous air -- although the little guy on the left looks like love might have killed him off. 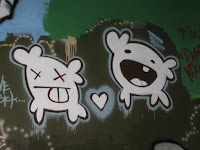 Did I mention I'm a big chicken? That stopping to take a picture in front of half a dozen bus stop loiterers actually gave me indigestion?
It was a real left brain/right brain conundrum. I wanted the pictures badly (left brain, task-oriented) but I was having trouble not worrying about people seeing me, judging me, wondering what the H I was doing (clamping down on poor old free-thinking right brain).
In the end, I stopped to take the pictures. A few buses rumbled by. A college kid, in a hoody and low-slung skinny jeans, walked by, too absorbed in his iPod to pay me any notice.
at February 18, 2009 No comments:

Five years ago today we lost my Mom.
*
It’s still hard to say that she “passed away” or that she “died.” Those words seem to have no bearing on my mother.
To say that we lost her somehow seems most accurate.
My sisters and I still feel a deep sense of loss.
She’s not with us.
We aren’t quite sure where she is.
*
After her memorial, someone said—intending to be kind—that heaven must have needed another angel. I replied angrily, Well, no one from heaven checked with me.
I still feel that way.
Cheated. Sad. Mad. Lonely.
She’s not with us, and yet she is. In our memories, in Lynn’s goodness and Jill’s mad sewing skills, in my dark eyes and Martha's laugh, in our Mom stories of chatting up strangers on buses or garage sale-ing or whistling the Hallelujah Chorus.
In dark chocolate graham crackers and diet Dr. Pepper and gooey brownies.
* 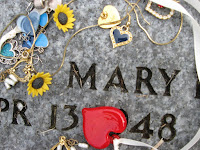 Today, I took Mom’s collection of heart jewelry with me to the cemetery.
Do you know how busy cemeteries are on Valentine’s Day?
I took her heart jewelry with me, and looked at it and photographed it.
I watched fat robins hopping around in the bushes. I looked up at the fir trees and breathed in the piney air.
What hit me hardest that day five years ago was knowing that my mother would never again walk the earth, see her beloved trees, inhale the cool sea air.
*
The heart jewelry always seemed corny to me.
She had stick pins, earrings, necklaces, bracelets, brooches, hearts of all sizes and shapes. I think now that her obsession with hearts wasn’t naïvete. It was a decision. It was a challenge.
Mom wore her heart on her sleeve, quite literally.
at February 14, 2009 No comments:

Email ThisBlogThis!Share to TwitterShare to FacebookShare to Pinterest
Labels: mom, the fam 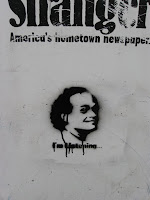 On Sunday I re-traced my steps, camera in hand.
I approached the bus stop to nab Frasier Crane, painted on the side of a newspaper box.
A half dozen bus riders waited, eyeing me. Nervous, I walked briskly past, camera in my pocket. Circled the block, walking slow enough that a bus rolled in. And disgorged more passengers.
Take the picture, I said aloud.
Out of the drizzle came a little person, a middle-aged lady about four feet tall who planted herself right next to Frasier. Great. She'd think I was photographing her. I didn't care about her, I just wanted this macabre-looking Frasier Crane.
Steeling myself, I knelt by the box and took the picture and hurried away. I chanced a look at her, the brassy blond little person, and she was staring down the street, willing her bus to hurry up.
at February 13, 2009 No comments:

Of all the days

What a day to grab the wrong camera.
Halfway through my Saturday morning hike, I halted, my eye caught by a one-eyed cartoon skull, right next to it a despairing graffiti tag, both prominently displayed in front of a tidy, freshly-painted yoga studio.
Stop, set down my backpack, let the dog nose around in the grass, avoid eye contact with the guy a half block up the street pounding a cigarette case on the sidewalk, pull out my camera bag--well, crap. I'd grabbed the old camera. The one with grit in the lens, which makes whirring, electronic complaining noises instead of a satisfying capturing click.
I walked on.
Over the next hour I spotted more amazing creations--a tunnel wall crammed with colorful tags and images. A phrase spray-painted on the backside of a dumpster: WHAT DO YOU WANT TO DO BEFORE YOU DIE? Even a smirking Frasier Crane.
The creative gods were mocking me. Ideas are everywhere and you may capture--none.
at February 07, 2009 No comments: 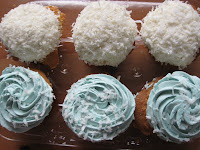 I know what you're thinking. And you're right. There's definitely a theme here. The fam celebrated January birthdays this past weekend. The 3 Capricorns among us made an executive decision to have cupcakes instead of a regulation cake.
To set the stage, I should mention that last Thanksgiving, we ordered in cupcakes from the same little shop, a dozen different cakes, but only one made of coconut. These coconut cupcakes are special--shredded sweetened coconut adds texture and creaminess to the tender cake, and bountifully caps off the not-too-sweet swirl of frosting. But I didn't get to taste this coconut cupcake last Thanksgiving, because someone bogarted it. Someone, who had nothing to do with ordering, purchasing, or coveting said cupcakes, got there first, and because they were mini-cakes, there was no possibility of sharing, no bite to beg, because it was reach--smile--gobble--and it was all over.
This time, we made sure there was plenty of coconut to go around.