It's been that kind of a week.
Ditchville.
Ditch City.
Ditchity ditch ditch DITCH.
I rented a car that has sat parked for days.
I paid for four covers and 1/2 the group split before their wrist stamps had dried.
I trusted a friend and they turned shady as a snake.
Time to re-erect the walls.
Time to remember: ditch-before-ye-be-ditched.
Good thing I'm good at walls.
*
Today's soundtrack for writing: 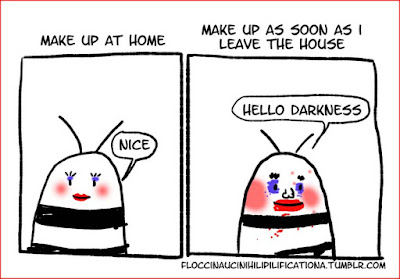 Yeah I realize some of my posts are more serious than others.
I'm a complicated human like the rest of you. Each day has its blend of smiles and dread and snacks and headache and success and worry. I saw a really cool show this week, Warren G (preceded by Slum Village), a chill hip hop kind of night, cold and drizzly, Nectar's garage doors half open to let in cooler air and clouds and clouds of smoooke. What a pleasure to see such professionals, old school artists and confident performers. The entertaining DJ Indica Jones kept us laughing and grooving in between sets.
Then yesterday, the Parisian horror, people mowed down by a death cult and why? Because they were out for a drink and music and dancing, the exact thing we'd done the night before.
*
To continue the thread from last week, there's this post. The yin and yang of abuse. It's thin-ice territory for me.
at November 14, 2015 No comments:

Email ThisBlogThis!Share to TwitterShare to FacebookShare to Pinterest
Labels: busysmartypants, heard around town, seen around town

you beat me
you wouldn't let me cry
you sat beside me with your arm around me and told me that you loved me
. . .
Chaos right now.
I have love, I have people, I have I have I have.
But no one can reach me.
No one can save me but me.
at November 07, 2015 No comments:

I've been told that I'm resourceful.
The word makes me suspicious. Is it code for something? A back-handed compliment, the way my father would tell me I was "attractive" and we both knew he meant "not as pretty as your sister?"
But then I think, well I am resourceful.
Once, when I was younger, my parents went out and left me in charge. There was a fight and my littlest sister slammed my hand in the bathroom door. I knew if our parents found out about the fight, we'd all be in trouble, so I concealed my injured, rapidly blackening index fingernail. Over the following weeks, as fluids built up under the dead nail, I meticulously drilled a hole in the nail bed with a safety pin, relieving the pressure. The nail eventually curled up and flaked off, replaced by a tender, snail-like new nail and I was still called on to be in charge, sometimes.
There was the job I got when I was an exchange student in Germany. My Spanish boyfriend had accidentally crushed the bumper of our group's rental van, after a weekend in Berlin. Everyone else's parents sent them money to pay for the repairs. Not me. My parents were broke as a joke, so, I studied the Marburg classifieds and found a job helping a doctor's wife in Elnhausen with housework. I still remember my German mother Ilse's incredulity when I announced my new position over dinner.
During college, I lived on $10 a week for groceries. (Thank you, Food Giant.)
Anyway, the thing is, I come from a long line of hard-headed Kansan women. One great-grandmother emigrated to western Kansas on a wagon train from Oklahoma. The other taught in a one-room schoolhouse and raised my grandmother as a single parent. My beloved Gram has had three careers so far--mother, schoolteacher, and real estate mogul. So I guess when someone says hey you're resourceful, it doesn't resonate too much.
Being resourceful what's expected. It's how we do.
It's who we are.