the sound and the fury

So there's this neurological psychological something-ogical thing I've dealt with since I was a teenager.
Until recently, no one seemed to know much about it, and when I say no one, I mean researchers (OHSU), shrinks, counselors, doctors, audiologists--no one.
Misophonia.
It's gotten more attention lately from a few celebrities and the New York Times, but no one seems to know what causes it or how to treat it. You can see, if you watch the Kelly Ripa video, how the ABC News interviewer goes from disbelief, to chuckling, to digust as Kelly tries to explain.
So the few of us that have it, have to deal with it pretty much on our own.
That sucks. Big time sucks. It's not a problem on the level of the big diseases, to be sure, but it's a daily quality of life thing. A daily challenge to sanity and equilibrium and general well-being. It makes me stay home when I want to go out. It makes me cranky and short-tempered when I want to be laid-back and relaxed.
My own shrink has thrown in the towel.
I mention it rarely, because when I do, I'm faced with disbelief or incomprehension.
How can it be that bad?
Suck it up.
You're crazy.
Anyway, this is a first step for me.
I plan to keep looking and talking and hoping.
at January 30, 2016 No comments:

So I saw Sir Mix-a-Lot at Nectar last night and I have to say he wasn't the highlight (sorry Mix) although he was fresh and I loved seeing him raise the 12 flag at the Seahawks/Panthers game last October. Fly Moon Royalty was the second opener and imma say right now they have evolved and grown over the past couple of years into a fun, funky, dare I say soulful group. The Nectar crowd was a little weird--a lady in a red lace dress wanted to fight me, the creepy-dude factor was high--but all in all it was a classic hip hop night--garage doors flung open, lots of dancing inside, plenty of room to chill out on the patio.
*
New music (to me) has come to my attention.
First, Jef Barbara. Who dis? I intend to find out more but for now check Jf's bandcamp and enjoi.
Also, Gangbé Brass Band du Bénin.
I'm really hoping these performers make it to the USA sometime soon.
at January 29, 2016 No comments:

I rediscovered Josephine Tey over the weekend. There isn't much better way to spend a Sunday morning than reading "The Singing Sands" in bed, coffee close at hand, dozing in the winter sunshine.

Email ThisBlogThis!Share to TwitterShare to FacebookShare to Pinterest
Labels: heard around town, reading

Back from a couple days in the 503, sloshing around the wet city in search of low key hangouts and good times. The valet at the hotel shared a 10% off card at the legal weed place around the corner, which was a great start Sunday evening, along with a shot and a beer at Paddy's. There was local hip hop and cheap drinks later on at the Ash Street Saloon. The next day--restorative juice and hot tea at the Pearl Bakery. A quick peek into Powell's. Then, wandering up Martin Luther King Boulevard around noon, Billy Ray's Dive Bar loomed invitingly. (I haven't cleaned the bathrooms yet, the bartender said, but come on in.) Alberta Street was mostly shopping, but the Hilt was a good place to chill for a minute, with cushy window booths (the better to witness all the passing beards) and a lot of local taps. Grabbing a couple of fresh, yummy donuts from gloriously uncrowded Tonalli's, we hopped a bus back to town. Later was a jaunt to Rogue Brewery, a tad corporate but good beer nonetheless. Last day: the best New York bagel I've had on the left coast, at Bowery Bagels. Then a hike out Division Street, crossing a rainy bridge and passing a kaleidoscope of bright street art. Unfortunately, the restaurant that was our destination was closed for a couple of weeks, an unsmiling ginger curtly informed us. That would be an awesome thing to put on your website, I said, only half-sarcastically, but he didn't deign to reply. Up the street was their sister restaurant, where the gin and tonic was refreshing but the noodles disappointingly dry and gummy. Another bus back to town, a round of pool and PBRs at the Rialto, then drinks and a meet up with my New Orleans pal, at the very swanky Barlow before catching the last Boltbus back to town.
*
This video breaks down the Donald's rhetorical skills in ways I hadn't thought about. I'm no fan of DT but this makes a lot of sense, although it doesn't explain Cruz's rise, nor do I agree that DT isn't smart. Check it out, word nerds: http://digg.com/video/donald-trump-linguistics-answer-question

My city is going through its share of changes, most of them not-so-hot.
Tens of thousands of people moved here last year, my old hangouts and playgrounds are full of woo girls and brogrammers and boring, rich jabronis (sour grapes, maybe, but it feels like the truth) and beloved institutions are being savaged by developers by the week. Daily I step over the sleeping homeless--one guy camps out at the heating vent near the Mar-Queen, another by the UPS Store, and violence lurks everywhere. Last week in the ID I came across a corner store festooned with police tape (the clerk was stabbed). Around the corner, a shoving and shouting match. Three blocks up the hill from my place, a man begged the cops to shoot him (and they did). Today, an hour before I ran past, the SPU campus was on lockdown.
Should I worry?
Is it simply life in the mad city?
at January 16, 2016 No comments:

It's that kinda day, time for super cool smoove and brain-electrifying beats.

Earlier, I watched a clip of the President prepping for his SOTU speech tonight and realized I'm not ready for him not to be president. I've enjoyed a Prez who's unabashedly intelligent, determined to advance a liberal social agenda, and also who's surrounded by an intriguing group of strong women. This is the only president my youngest niece remembers. How cool is that! And yet, I fear who and what is to come.
Other realizations:
--I gotta share more of my writing self on social media. No way around it. I gotta.
--Football over the weekend was an emotional journey, from the criminality of the Bengals/Steelers, to the joyous disbelief of the Seahawks finish. And then the two blowout games. Boyeee the AFC is w-e-a-k.
--Damb I miss Outkast. Heard a couple of songs from The Love Below at the Viking the other night, including The Way You Move. The video is gloriously trippy.

Email ThisBlogThis!Share to TwitterShare to FacebookShare to Pinterest
Labels: heard around town, muzik 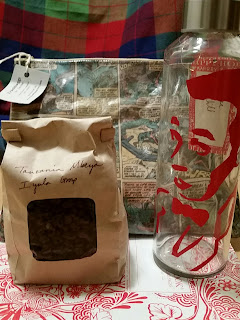 My sisters are mad talented, y'all, and the holidaze proved it to me all over again.
We had a family agreement to not spend a lot of money on gifts. Everyone is broke and nobody needs anything. I made my annual batch of vanilla a la Martha Stewart (vodka + vanilla bean + time) and invested in Theo chocolate bars for all (local, fair trade, delishus).
But crikey what my seesters came up with!
A recycled-comix Trashbagg to hold my colored pencils.
Home roasted coffee beans via Sweet Marias and instructions on making cold brew.
Personalized water bottles--mine featuring Pee Wee!--and hopefully available soon on etsy.
Not to mention the cookies and candies: bourbon balls, homemade fudge, sugar cookies, Russian tea cakes, chocolate crinkles.
Now there is a sharkle lurking in the midst. Stay tuned.

Email ThisBlogThis!Share to TwitterShare to FacebookShare to Pinterest
Labels: madtalent, seen around town, the fam

HNY 2016!
I rang it in with friends and laughs and an 80's band.
Yesterday, weary but not hungover, a cold clear day, pho and thrift shopping with the fam.
Today, writing. Edits to a draft.
And the realization that I might-slash-NEED to confront my biggest writing fear, this year. More on that soon.