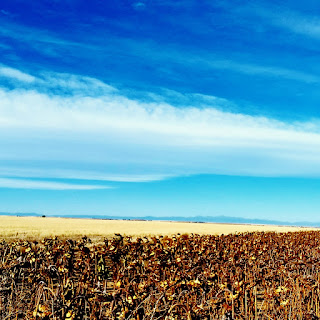 Last weekend I visited family in Colorado and Kansas. My grandmother celebrated a major birthday recently and my cousins, aunt and I agreed it was time for a road trip. Interstate 70 takes you directly from the Denver area into western Kansas, and it was a pleasant drive both directions: unusually warm fall days, calm winds, and the company of family.
I forget each time how beautiful the landscape is, so flat and broad, the sky an enormous blue bowl overhead. At home we see snippets of sky, framed by evergreens or reflected in the coastal sea. In western Kansas, the sky fills your vision, edged with crispy sunflower fields, bristly rolls of hay, furrowed dirt roads, the occasional sparkling pond.
My Kansas aunt cooked up two days' worth of goodies, including coleslaw and pumpkin pie. We wandered downtown, sat in the shade with Gram and my cousin's pet dog, played marbles and talked sports and laughed and reminisced about the ones we've lost. My shrink keeps telling me I'm lonely and I keep saying that I'm not, but I will say that this weekend, I felt like I belonged, like people were looking out for me, and that felt pretty great.
at October 29, 2016 No comments:

It's been fun checking out my new neighborhood.
In less than a week I've been in 5 bars, a pizza place, 2 thrift stores, and a couple of galleries. And this is just the beginning, if my liver holds out.
Let's start with the bad news. The pizza place was a big disappointment. Overpriced soggy pie with a weirdly salty tomato sauce, attitudinous servers--carded twice on a Wednesday night!?--irritating soundtrack--I doubt I'll go back.
It's a competitive neighborhood, and some of the bars shone with personality.
Clever Dunnes is an Irish pub with TV's showing whatever sporting event is going on, a rock-heavy soundtrack, and a boisterous bartender who was quick with drinks, food advice, and some light kidding. Great for MLB and a veggie burger.
I've been in Redwood a couple times before. Not a fan of the taxidermied animal heads but the lighting is dim and the booths are comfy and the price was right for a couple of Olympias on tap ($3 I think?). Not a fan of the indie soundtrack but the bartender was prompt. Weirdly, the door guy was already carding people at the tender hour of 7 p.m.
Bait Shop may be my favorite of the bunch. It's busy and loud, but somehow there's always a spot to be found. The server this night was funny and cool and brought drinks quickly, even as our little group expanded. Every table around us was packed with people having a good time, and my rye Manhattan was perfect.
Corvus was new to me. I didn't love our table by the door, and the crowd was oddly diverse--a group of serious-looking Asian men in suits, couples on quiet dates, a rowdy threesome at the bar--but the server was quirkily friendly, and brought out delicious cocktails and a plate of hot salty fries to stave off impending hangover.
DeLuxe is also an old favorite, and didn't disappoint on an after-midnight stop. The bar seemed stacked with regulars, drinks came out fast, and the bartender dutifully helped a friend get over a bout of hiccups.
Kessler's was my last stop this week, when I stopped en route to art walk for a beer and some Thursday night football. This may be a go-to for sporting events--fast, efficient bartenders, hometown crowd, and low prices.
at October 15, 2016 No comments:

I've been checking out the creative brains behind Super Deluxe lately (mostly this provocative video about the first presidential debate). There's also Super Deluxe Animation, which recently featured a bunch of very short (short as in a couple dozen seconds) videos.
This one is my fave. I can't get enough! Check out Morpha! Utila!

As a creative person, this series has made me think: How can I make my own stories shorter, brighter, more fun and engaging? I'm going to figure out how.
at October 08, 2016 No comments: