A note in remembrance of a fine, fun, smart and charming young woman, who departed this planet on Friday, abruptly and unexpectedly. Left behind are her equally amazing partner, her baby daughter, and hosts of bewildered friends. I had the good fortune to get to know these women the past couple of years. It's been a tough summer. A friend's mom passed quite suddenly last week as well. I am weary of departures. 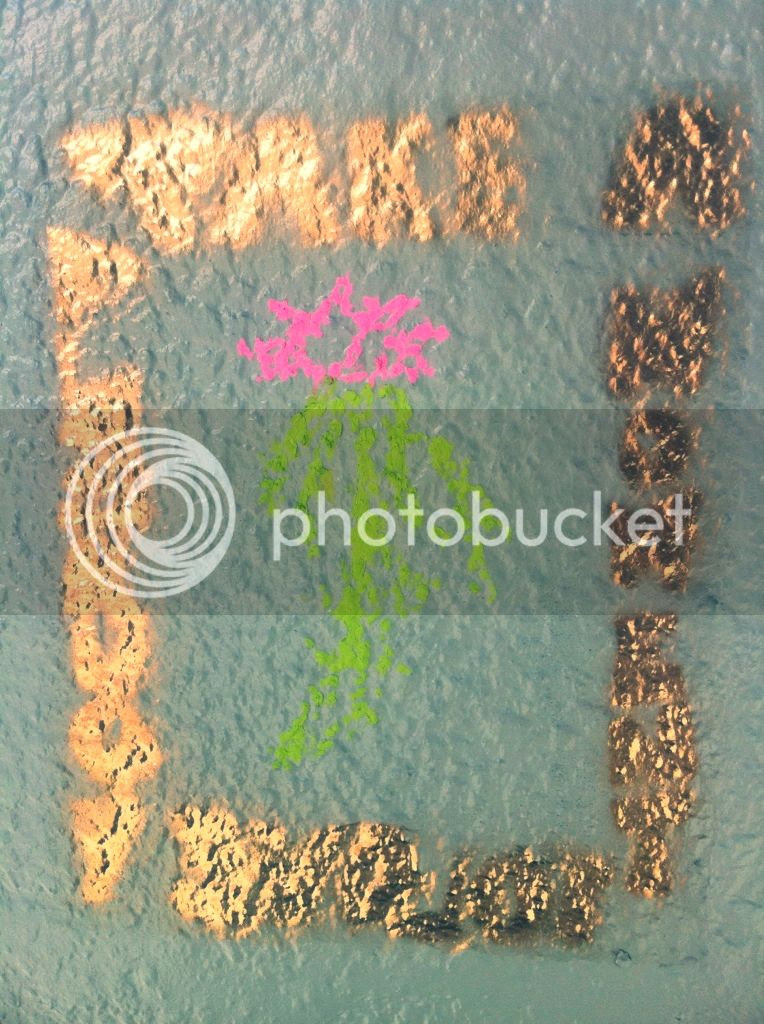 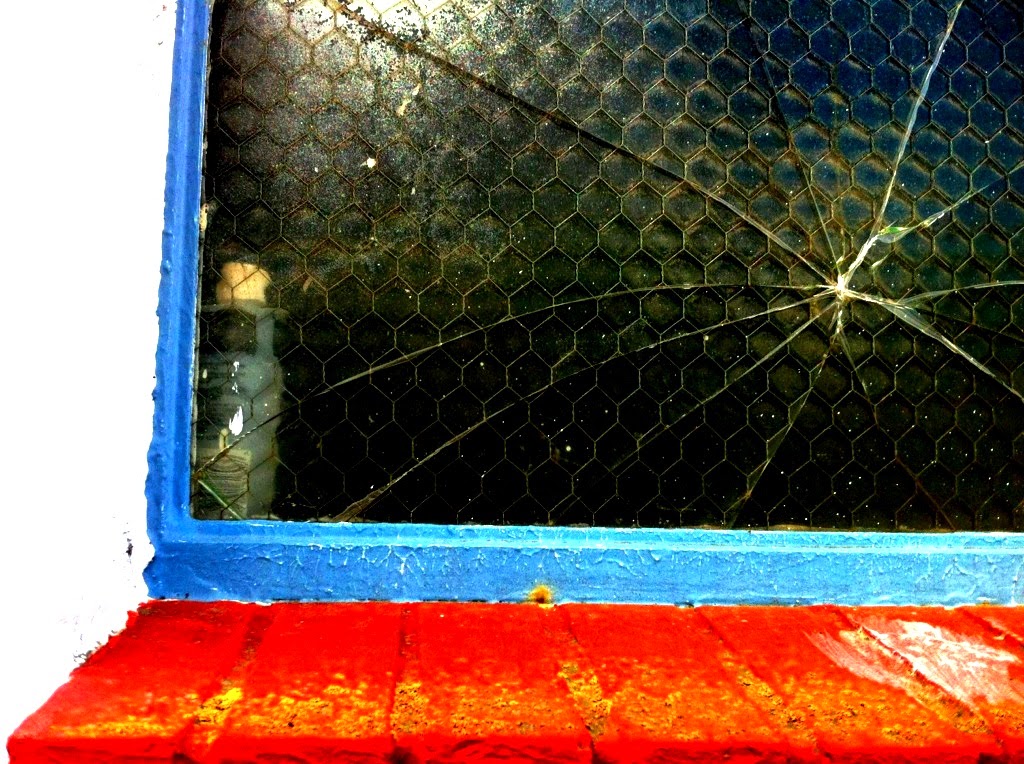 At a party the other night, the friendliest animal present, humans included, was somebody's beagle.
I tried, and failed, to penetrate the other humans' perimeters. The turned shoulders. The averted eyes. So, fifty-six minutes after I arrived, I departed.
*
At a friend's dance performance a month ago, I sat in the audience with a pal, sipping Jame-o from a clandestine bottle and reminiscing about the last dance thing we'd been to (zoe | juniper @ otb). This night we laughed uproariously at an older man dancing a deux with duct tape. Later, when my friend entered the stage with his dance partner, wearing a dark pageboy wig and cute little skirt, I didn't recognize him. Only when I heard his voice did I realize: she was he. 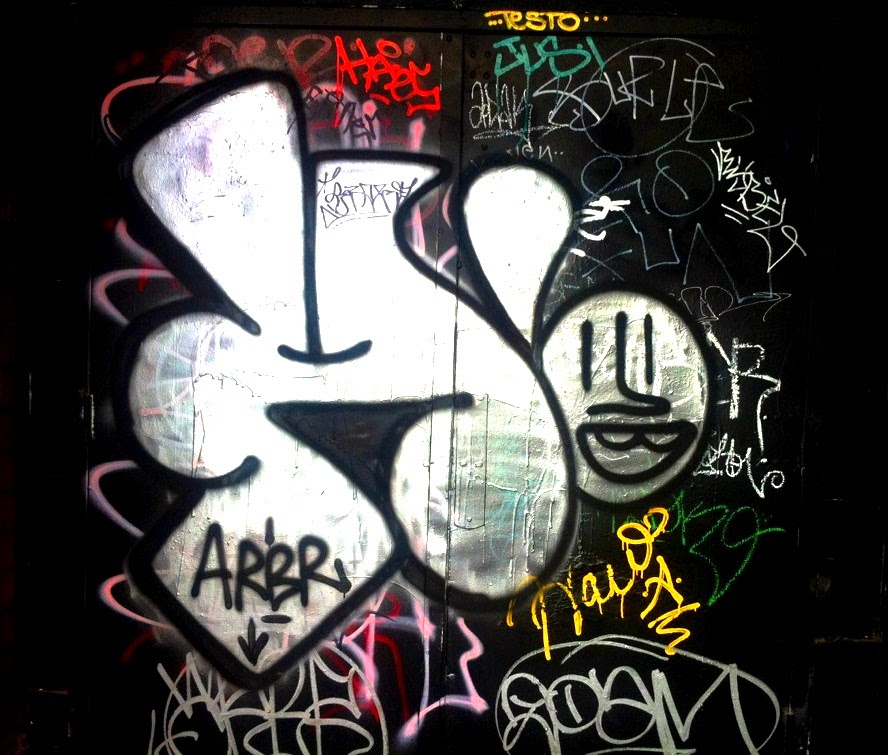 Chaos, inside and out. I have nothing more to say today, because the hate is daunting
because jeezoids and fanaticks
because Ferguson
because wereallgonnadie and wedeserveit 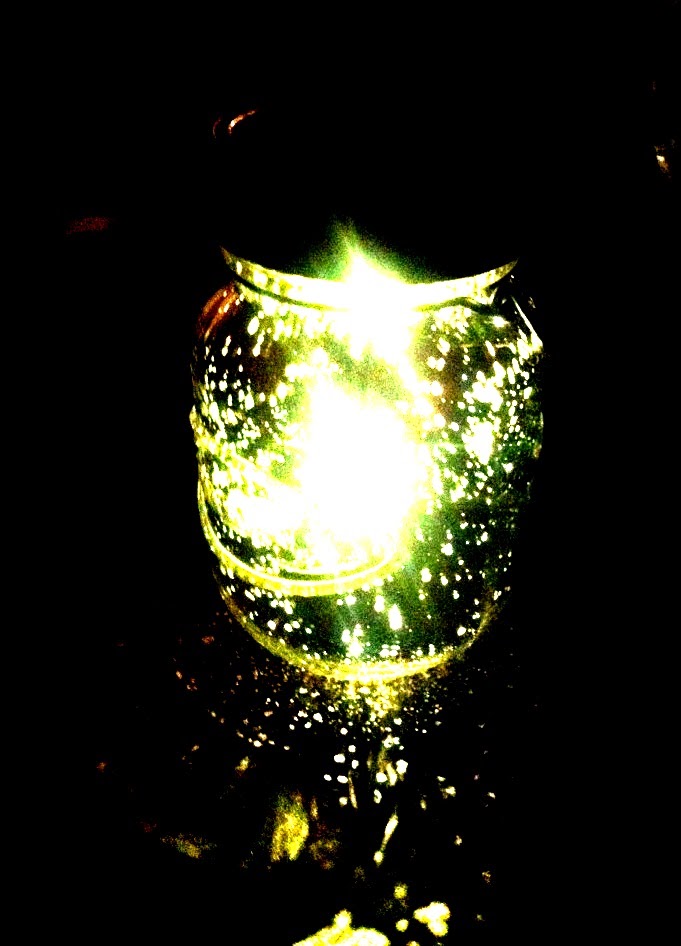 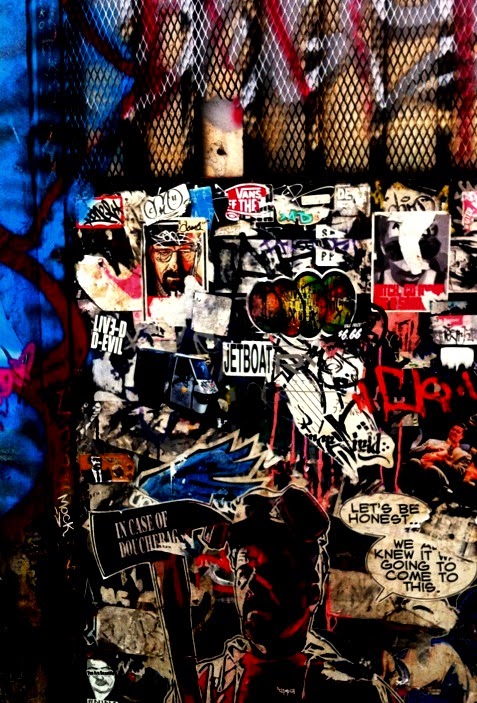 Email ThisBlogThis!Share to TwitterShare to FacebookShare to Pinterest
Labels: meh

Big things afoot this week.
I feel abandoned by friends. Left out, moved down the list, the usual cycle of close and not so close. So, my plans for fall change. I may not be traveling as far as I'd hoped. It's discombobulating and disappointing. Hopefully, it's temporary.
Really big things afoot with the fam. And it's hitting me how much I miss my mom.
Boy I wish she were here for this. She'd be in her element.
We are leaderless. I'm sad, yes, but I wouldn't want not to be.
at August 19, 2014 No comments:

Pictures snapped mostly by my niece on a tour of campus residence halls. All I added was filters.
#sammyisgood.

Email ThisBlogThis!Share to TwitterShare to FacebookShare to Pinterest
Labels: fotos, photobucket, the fam 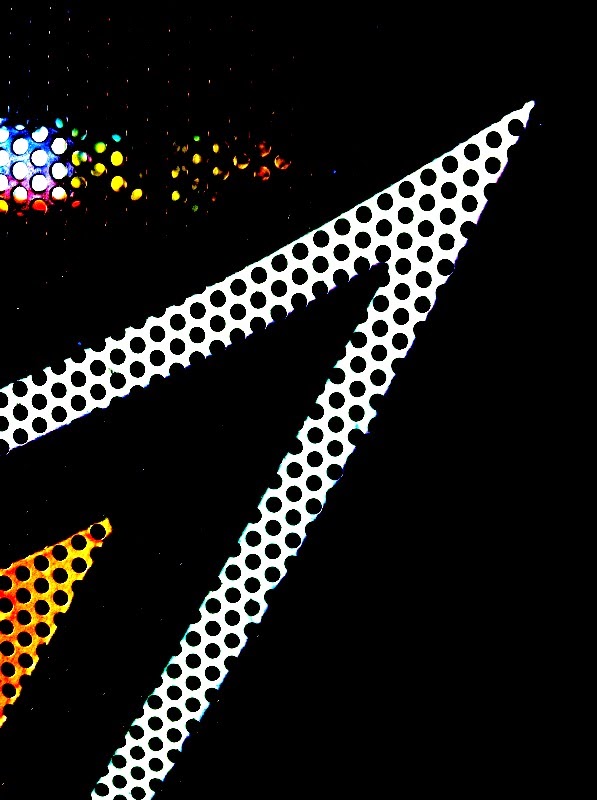 A friend told me this week that they have been communicating with "the other side." Confused, I asked who exactly they meant--Republicans? People on the East coast?
This friend had consulted a pet communicator to say some things to a beloved dog about to undergo surgery. In addition to clearing some things up with both of the household's dogs, the communicator also had some messages from relatives of friend. Deceased relatives. And, from my friend's spirit guides.
The communication was part verbal and part experience and even as my friend kept saying "I know this sounds crazy" I couldn't help but notice that their demeanor was supercharged, glowing, ecstatic almost.
My friend asked if I wanted to talk to my momash and I'll be honest, it scared the shit out of me. I didn't sleep much that night.
My friend definitely heard some things that might make life easier. I'm not sure I can say the same for myself.
* 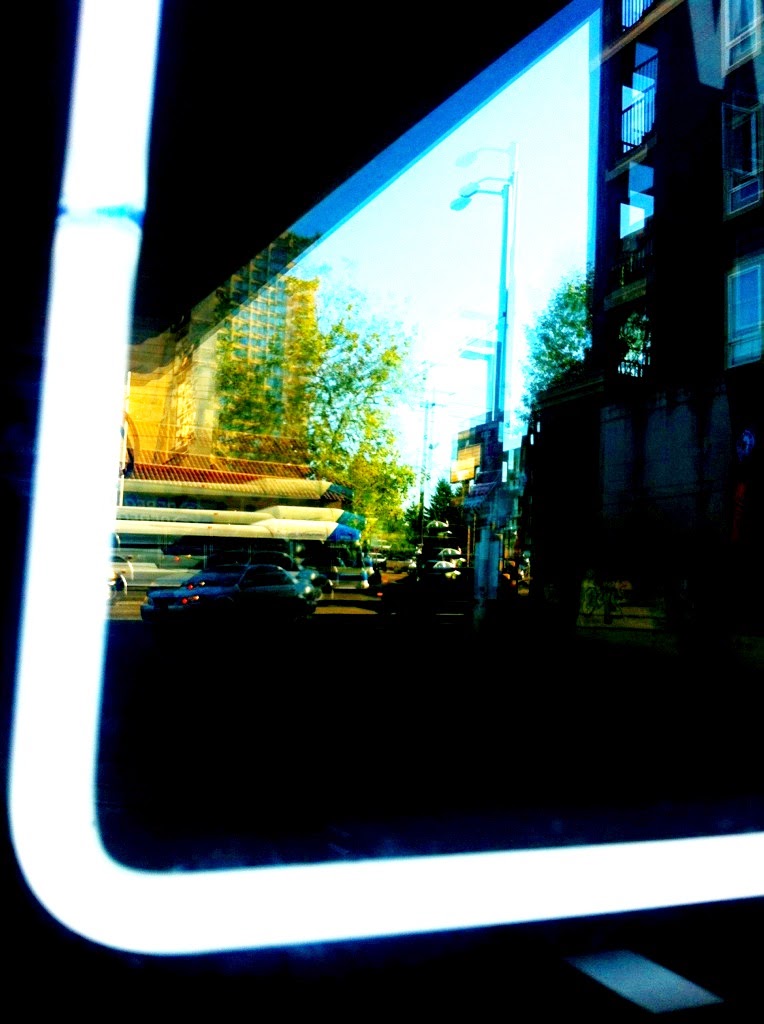 Then I dreamed of momash two nights ago. In the dream, I was lying on the floor of a bedroom, sobbing, "I miss her so much." I woke up in tears.
Yesterday, news that a friend's father suffered a fatal heart attack while hiking in Arizona. Two weeks ago, a bunch of us met up for dumplings and laughs with this friend and his parents. He was an active, smart, hilarious and generous man and I can scarcely believe he is gone. My heart aches.
*
Last night, the much-anticipated Lady Gaga show with good friends and a new one. I wore towering gold sandals just because, and I'm hungover and my feet are killing me. It was a glorious night.
*
photos are reflections in the window of the Union 76 on 45th.
at August 09, 2014 No comments:

I struggle with anger and resentment. Does everyone? This much? I'm not sure.
It's like realizing you'll never see yourself as others do--you'll also never know exactly how anyone else feels.
Some work situations have changed and I find myself so confused.
I find myself actively disliking a person or two.
One person I've known only a few weeks. It feels like plenty. Like we could never ever meet again and I'd feel like we'd gotten as far as we ever would. Some days I feel like if I have to hear that loud cackle just one more second I will punch out my eardrum with a dull pencil.
What I should remember is that some of my best friends are people I loathed originally.
I think my default setting is a reflexive "get the fuck away from me."(With exceptions for dogs and kids.)
When I'm fighting with my fella--and we fight, oh my god we go at it--the words I hear myself yelling sometimes are the words I am telling myself. The inner monologue, the super critical voice that says I'll never be skinny enough or nice enough or a good enough writer or friend or sister, and that everyone knows what a hypocritical fraud I am. Man, that's scary.
I know, on an intellectual level, that I can't love anyone else until I love myself.
That just feels like a whole lot of homework. And I laid off my shrink back in January.

Halfway through 2014 what? This has been a spectacular summer, a little too hot in stretches but jammed to bursting with good times. Less recap July shall we? Day one, in the 90's, and I met some pals on the back patio of Blue Water Taco for cerveza and burritos before checking out "Rushmore" at SIFF. The a/c conked out during the movie but it didn't matter. Bill Murray's Herman Blume is a work of beauteous ennui. After, drinks with my fella and a good friend at Red Papaya (salt-n-pepper tofu I am coming for you soon). A couple of days later I met up with some girl pals at Cicchetti for a drink. A newcomer threatened to call me Elsie (I warned him the consequences would be dire). After a couple of cocktails, my ladies pedaled home , calling "Bye!" and I took a leisurely stroll home in the golden summer evening. 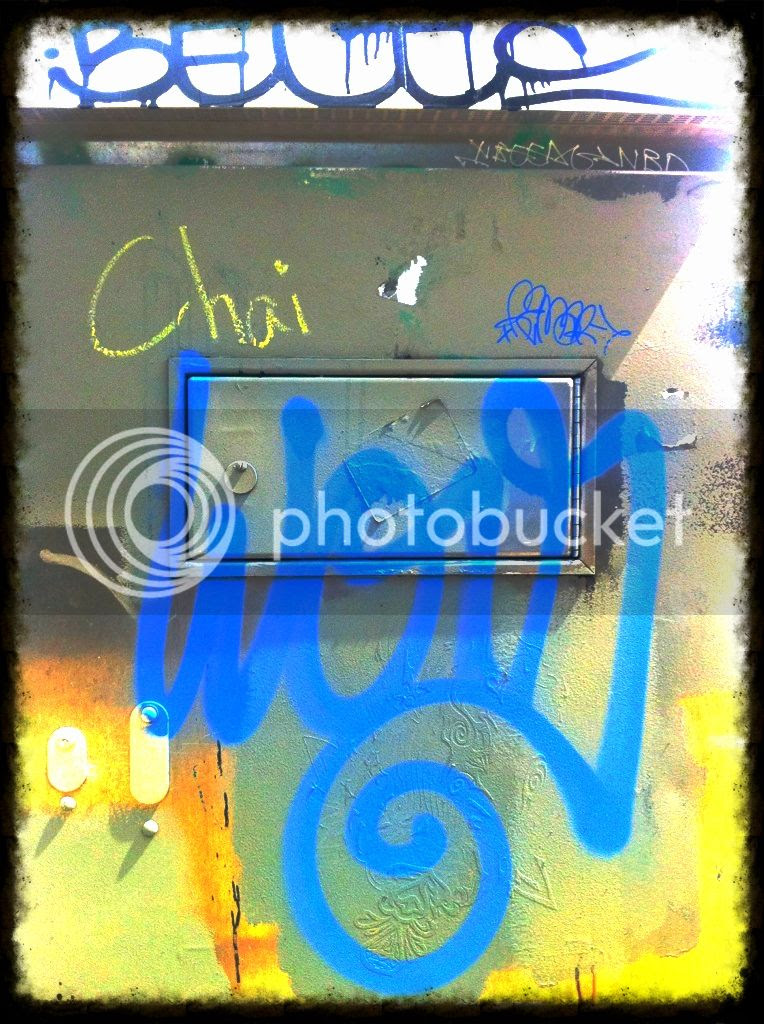 The Fourth started off with bloody mary's and a pal about to welcome her out-of-town fella into town, for a month. Then a trip to Boom City to stock up on fireworks, and our traditional family blowout at my Sid's--grilled hot dogs and Field Roast's new veggie burgers, my own elotes salad and amazing homemade ice cream sammies, courtesy of Hammy and her mom.
On the 7th, a friend screened her movie at the Harvard Exit and made me miss Tanzania. Afterward, drinks at Bait Shop, our decision finalized by chance encounter with an enthusiastic older lady in a crosswalk. That Friday I worked a half-day, picked up a rental car out on Lake Shitty Way, parked it in my neighborhood, changed shoes and jaunted out to Alki Beach with a pal. It was a blistering hot afternoon so we shaded ourselves near a rock (which happened to house a colony of peaceful bumblebees underneath), shot the shit, and drank my custom beer/lemonade mix. Late afternoon we met up with another pal for a patio drink, then went up to the Junction to check out the festival. Music = lame, crowd = weird, but there was a beer garden and a big bunch of us detoured to West 5 for sustenance and cooler air. Later on, my friend flashed her clown-print, lace-edged bike shorts and a passing driver yelled "girl, you got it."
The next week--still hot!--was all California.
There was a backyard dinner the next week, manhattans and taquitos and lots of laughs and some tears, as my friends were heading to a memorial service that weekend for a dear lady. The next night, rain! and pizza with my seesters and Hammy. And the last weekend in July -- the Capitol Hill Block party. It's a sweaty good time, days and days of sun and music and wandering on the Hill with friends. It's a mini vacation in the middle of summer. The month ended with more dance and music, a new friend's experimental dance performance--duck tape and gender bending--and an old pal's album release party (ps I scored a t-shirt).
July: woo.*
*photo of a utility box in Fremont.