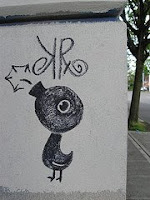 I love this bird, markered onto a pillar somewhere on 5th Avenue in downtown Seattle. Is that his head, or a cartoon bomb? Is he whistling, or about to explode? His unwaveringly shiny eye gives no clue.
*
Last week, when it was so hot, I witnessed an act of true seagull savagery. A fat angry male made a feet-first, three point landing on the head of another gull which was in the middle of packing half a bagel down its gullet. Birds are not known for their avian kindnesses but this guerrilla attack was both alarming and merciless. Incoming gull managed, with his sneak-bounce attack, to dislodge part of the bagel. Diner gull scooped up his crumbs and hopped-flew away, swallowing like crazy.
at August 03, 2009

Email ThisBlogThis!Share to TwitterShare to FacebookShare to Pinterest
Labels: grafitti, seen around town