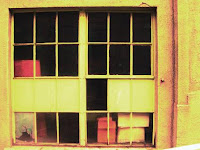 An artist friend told me recently that I had an eye for picking out patterns in my photos. Let me be clear that he didn't mean this as a compliment. He's someone who has actual talent, and a shiny degree from a local art institute. He fills sketchbooks chock full of studies--a coy shoulder, a barfly's potbelly, a gaggle of bus stop loiterers. So when he said this I felt as though he were saying I had more dedication than skill.
But I thought about it some more and now I think there's no reason to be mad. I 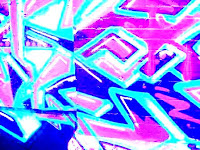 am obsessed with patterns, with line and shadow and angles. I love the sad orderliness in this rundown Pioneer Square window, and the graffiti riot of color.
*
When I was a kid, my mom made all our clothes. She rocked urban craft uprising way before the hipsters. I passed the long hours at the fabric store looking at Butterick patterns, imagining myself in this blousy top, or these rakish gauchos. It took some doing, making that mental leap out of two-dimensionality, from a lackluster fabric bolt and tissue paper pattern to actual clothing, but now I think maybe it's what got me here. Seeing the potential.
*
9/1 UPDATE: I got a text yesterday asking "am I the artist you wrote about on your blog?"
Caught out!
Said artist, Nthnart, who blogs here, countered that he'd meant his comment as a compliment.
So, I take it as such, with slightly embarrassed gratitude.
at August 30, 2010 No comments:

More photos from Westlake Avenue a few weeks ago.
Also, I finally cracked the login to Nico Nico Douga. More delicious cross-posts to come.
at August 28, 2010 No comments:

We're all in Kansas 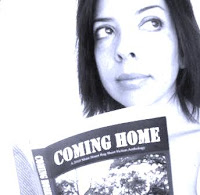 As most of you kids know, I've gotten a lot of "no's" this year, but happily have had a few "yes's" too.
So please lay eyes on the new Main Street Rag anthology, Coming Home. My story, "The Sunflower State," is about Kansas and the sweet pain of loss and family and buffet restaurants. I hope you find it as delicious as fried jojo's and all-you-can-eat chocolate pudding.
at August 23, 2010 2 comments: 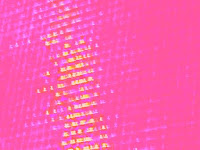 My nighttime rambles took me past China Harbor not long ago. Take a peep at BusySmartyPants:Tumblr tomorrow for more tasty shots.
You know me, I love the shine, the sparkle, the dazzle.
Taking pictures in the dark is a furtive kind of pleasure.
You don't know if what you have will turn out.
As with most things in life.
*
Do what you're doing, get what you're getting. Got this unshaven gem from a friend earlier this week, when I was low. 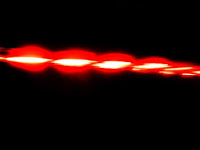 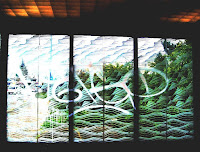 If you live in Seattle you've seen this tag:
LetGo
I try not to get crazy about reading too much into street messages but sometimes I think about what this means.
LetGo
As a full-on Capricorn my life has been all about running the trains on time. I'm the Bundesbahn in a world dominated by Amtrak.
Or so I thought.
I thought I was doing pretty well with the old LetGo, until recently, when I realized nope, I'm still holding on pretty damn tight. That a lot of the time, I'm white-knuckled and trying to jump the light.
So what happens if I let go? If I'm not in charge?
I wonder if I can do it.
LetGo.
at August 17, 2010 1 comment:

Yeah and elephants are microwaves

Juvenile, obvious humor with a soupçon of violence--so much to love about Annoying Orange.
at August 14, 2010 No comments:

Email ThisBlogThis!Share to TwitterShare to FacebookShare to Pinterest
Labels: funny

As a writer, I've gotten used to rejection.
Being rejected stings, sure, but I'm sending out one or two stories a week, so the rejections pour in--sometimes via a form e-mail, which is gross, but sometimes the No is a Not quite, try us again, and I'm enough of a masochist that this feels kind of good.

Real life rejection still hurts a hell of a lot.
Man, does it.
That feeling of utter misery.
Pain. Sadness.
The helpless rage. The second guessing. The drink-right-from-the-bottle hopelessness. 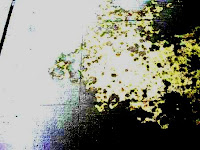 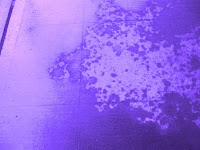 It rained today for the first time in what feels like a month.
Everyone's complaining.
Not me, I love it.
It's good staying-in-bed weather.
Even better coffee-goodbye-kisses- and walking-around-town weather.
Wet on dry is lovely.
at August 07, 2010 No comments:

I've been taking a hip hop dance class the past few months.
A lot of people find this pretty funny. It is funny, I guess, because I'm pretty terrible. I wasn't allowed to dance as a kid and now I want to know how to work it out to my beloved hip hop beats.

I was terrified at first, standing in my sneakers and workout clothes in front of a wall of mirrors, trying to learn to count and copy the reverse image moves of the charming b-boy instructor and not mortify myself in front of a dozen college-aged dancers.
But then I realized that no one's looking at me, they're concentrating on themselves, and now it's okay, funny even, hilarious, because no matter how much I/we screw up, cheerful Rex says, Good job, you guys are doing great. And sometimes he jibes us--what's with the jazz hands?--and we all laugh.

Commit, guys, Rex adds. If you act like the moves are weird, they'll feel weird. Throw yourself into it. At least if you screw up, you'll screw up trying.
Word.
at August 04, 2010 No comments: 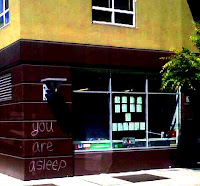 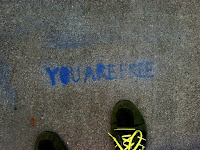 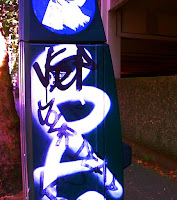