pix from the Nest 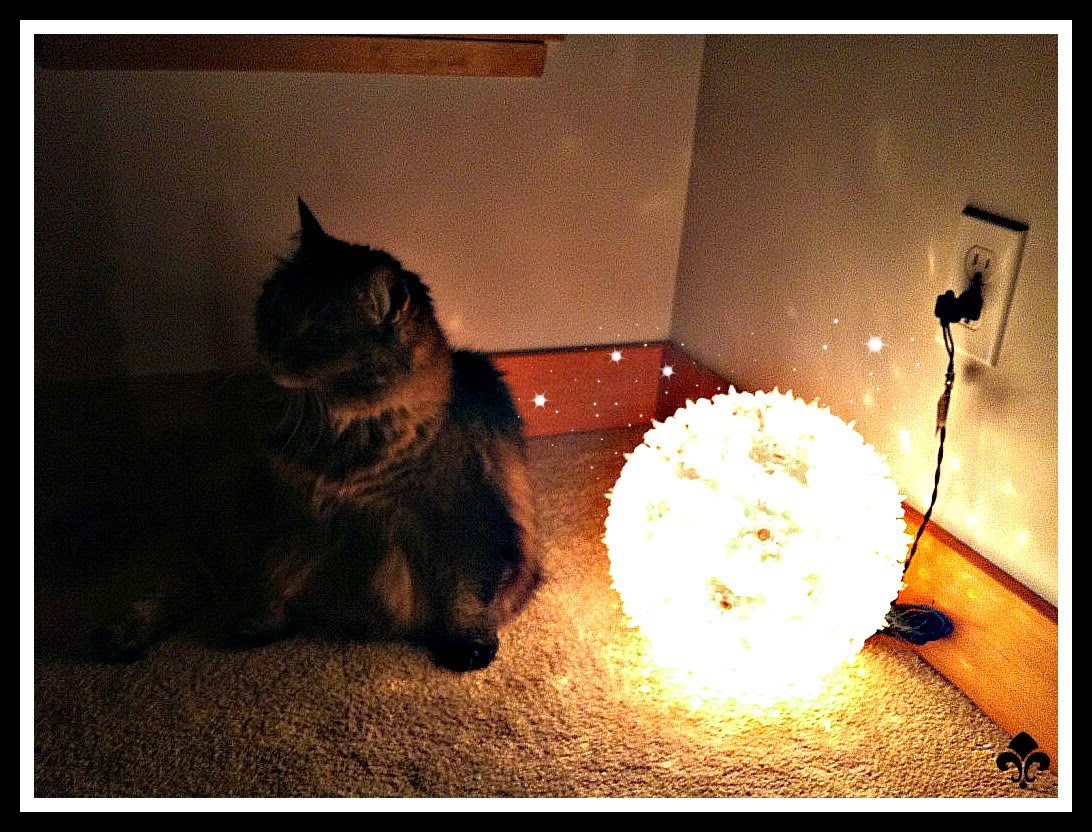 A couple of pictures from some dear friends' cabin on a nearby island. We partied all day yesterday--rambled around the 5 acres, discovered a stream bed under a massive cedar, drank and smoked and dined finely, then woke this morning to a thick blanket of snow.
* 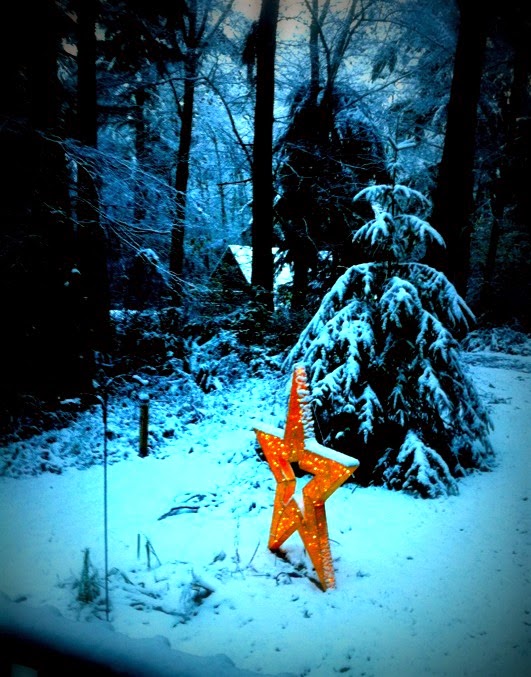 And Thanksgobbling was oddly relaxing and stress-free. I think we surprised ourselves. Started the day with Yula picking us up at the transit center, a stop for French pastries, then to her place for coffee and strategizing. She and my fella masterminded turkey and dressing, while I was on point for mashed potatoes, sweet potatoes and fresh cranberry sauce. We snacked on pickles and Boursin cheese and homemade olive bread. It all came together along with greens, bread and veggie Stove Top stuffing for plates of deliciousness, along with a 2003 red that Yula had been saving. Hammy was laid low with a stomach virus so we had pumpkin pie and pecan pie and bread pudding with brandy sauce while she napped, then later on watched the Seahawks dominate the Forty-whiners, 19-3.

The news from Ferguson last night was not good.
Listening to the radio at my kitchen table reminded me of waiting for the OJ verdict twenty years ago, in a co-worker's car en route to a meeting, both of us holding our breaths, the jaw-dropping surprise us white knuckleheads felt when we heard "not guilty."
Last night as I listened to the prosecutor run down a painfully long list of defenses, it seemed clear that there would be no indictment.
My social media blew up. Speaking of knuckleheads, several of my Midwestern family members posted some pretty offensive shit. Mostly, among my friends, I saw disappointment, anger, not much disbelief, moms worried for their kids' safety, pissed off activists, plain-old-bewildered people.
I still feel sad and mostly helpless. The system is working as it's designed to, someone said today, and I realized she's right.
DailyKos had some good analysis:
--the questions no one asked
--prosecutor as defense attorney
I'm reading the documents released on the Washington Post.
And bits of this essay stick in my head:
--I'm deeply and profoundly disappointed and honestly lack the words to explain my emotions right now. It's a frustration in which a man doesn't feel much like writing. It's an exhaustion in which one has hoped just one too many times for justice, only for it to escape in the fleeting fashion that is sadly familiar in cases of young black men killed by police officers all over this country.
--I had hoped officers would be found guilty when they were found beating Rodney King senseless. It was on video. We all saw it. They were acquitted.
--I had hoped officers would be found guilty when they fired 41 shots at an unarmed Amadou Diallo standing in his doorstep. They were acquitted.
--I had hoped the officers who fired 50 shots into Sean Bell's car as he left his bachelor party would be found guilty. They were acquitted.
--I had hoped the officers who shot and killed football star Kendrec McDade—after they lied about him shooting at them first—would at least go to court, but the grand jury said they were justified.
--I had hoped the officers who chased Ramarley Graham into his home and killed him would at least be tried, but they weren't
--I had hoped the officers who shot and killed John Crawford in Wal-Mart would be cited somehow, but the grand jury found they were justified.
--Now, here we are, with a young man who ran over half a football field away, after a confrontation with Officer Darren Wilson, only to be shot over and over again.
--I had hoped Wilson would at least face these charges in an open court of law, but it will not happen.
Change is gonna come, another friend posted, with a link to Sam Cooke.
I hope she's right.

a fountain of eyes 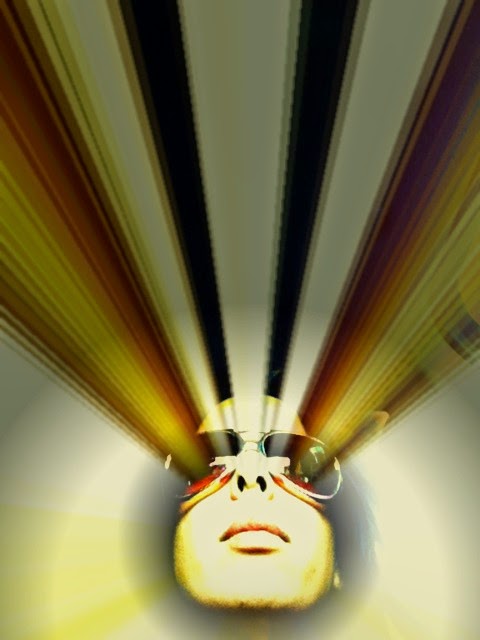 It's funny, I took this picture sitting around in a rental car waiting to pick up my fella. Picmonkey boyeee, I am having fun with it. A friend commented that I should release an album. Right?! Except...I can't sing.
Good news ahead, another story about to greet the public. More to come!
at November 21, 2014 No comments:

seen somewhere by someone (me) 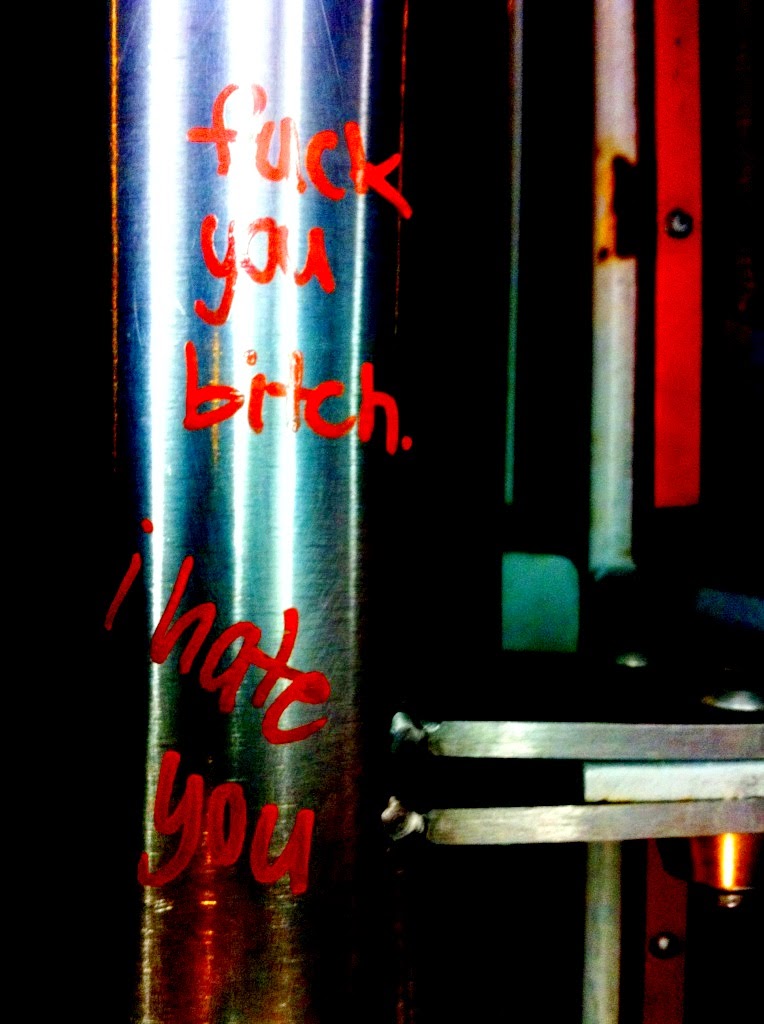 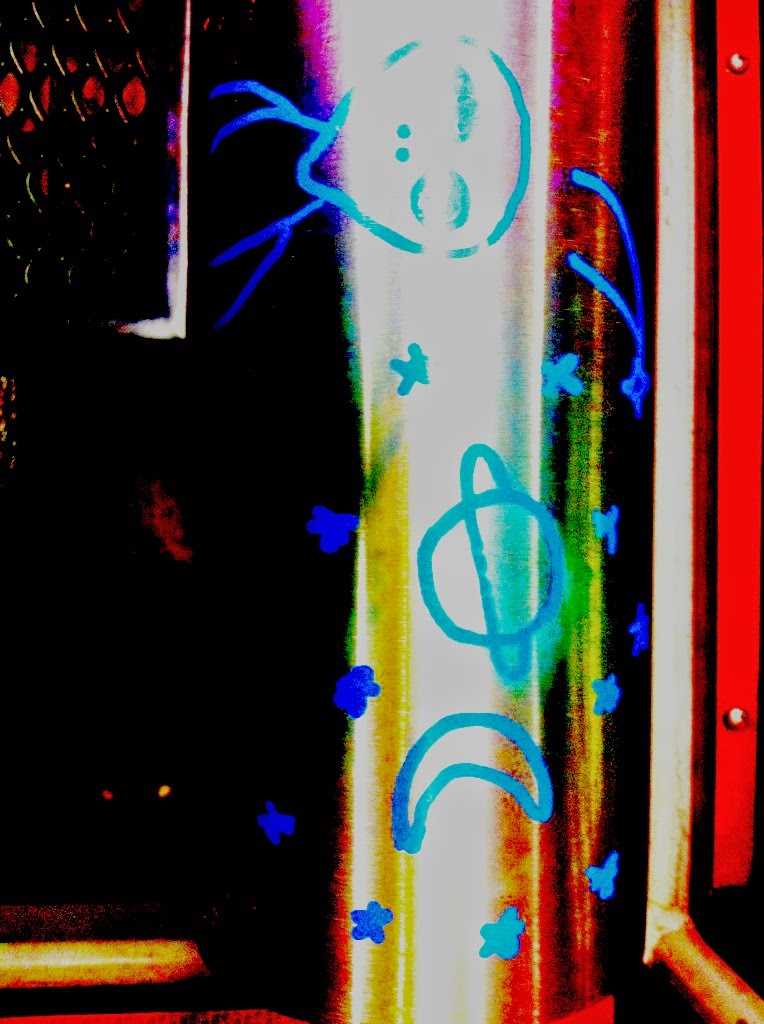 Email ThisBlogThis!Share to TwitterShare to FacebookShare to Pinterest
Labels: fotos, seen around town 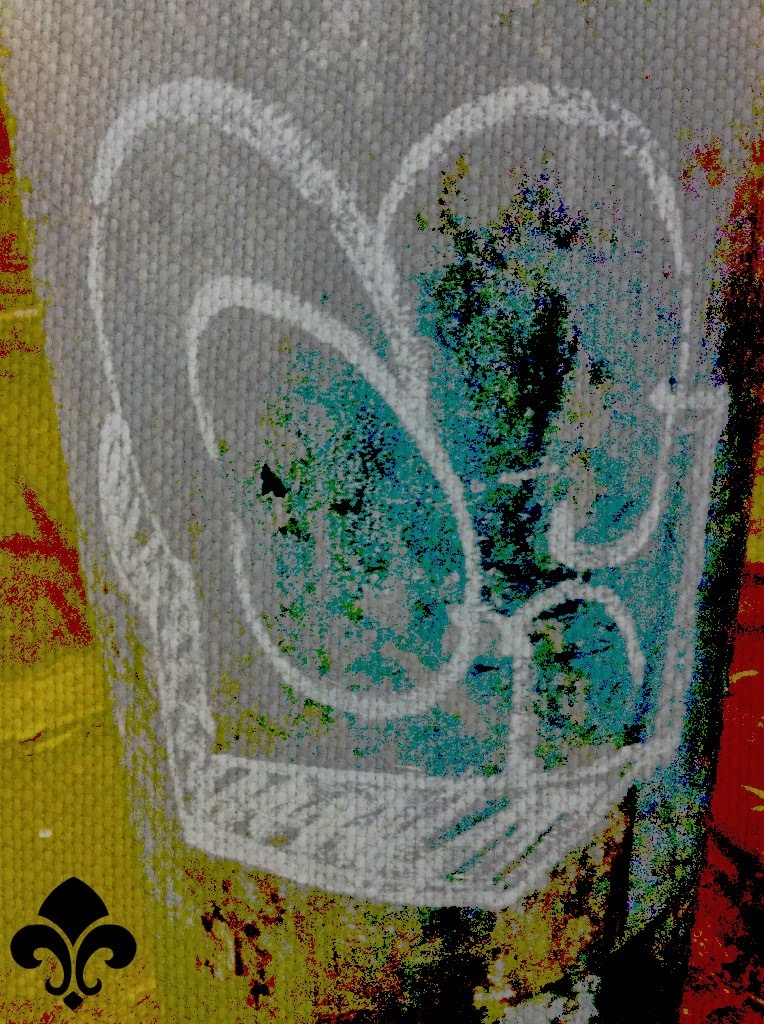 I'm having fun playing with Picmonkey to edit photos. This was a chalk graffiti drawing on a utility pole with about a half dozen effects. Kid in a candy store and such.
*
I had a scare this week.
What does that mean? It's skirting what I mean to say, which is that I got scared this week. Seriously frightened, in my apartment, alone, in the middle of the night. I took steps the next day to be safer and I dug up the weapon my sisters got me a few years ago.
My friends have similar fears, I found, in conversations since. One, who just moved into a house, has thoughts of how easy it would be for an intruder to get in. We talked, laughingly serious, about buying baseball bats.
Another, at home alone some nights with a child, worries some, and props a bottle up by the door as an early warning system.
We all walk around juggling fear and bravery and strategies inside us, I guess. Not so far removed from our ancestors, huddled around the fire for warmth and safety, fingers twitching near a trusty stick, just in case.
at November 15, 2014 No comments: 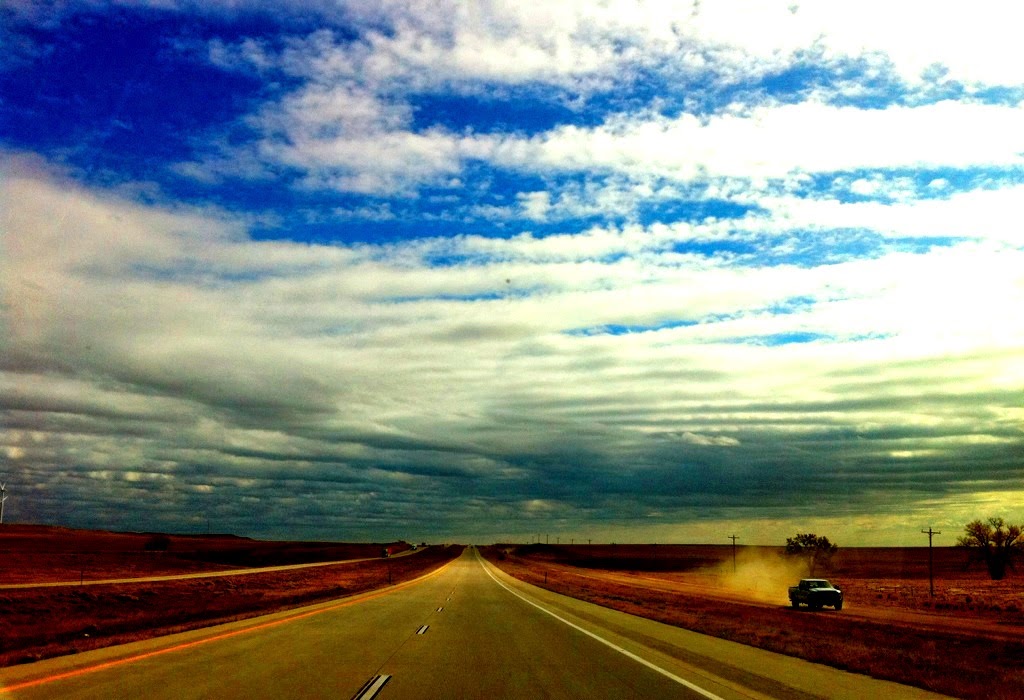 In my travels last week, I drove nearly 900 miles. Most of the driving was on Interstate 70, a well-engineered four-lane highway (and then some, closer to Denver). I fueled up on bubble gum and coffee and once I set the cruise control, did not tap the brakes for hours. The radio options out on the plains are interesting: all I found were turn-or-burn preachers, the ag report, or country music stations. It was good thinking time. 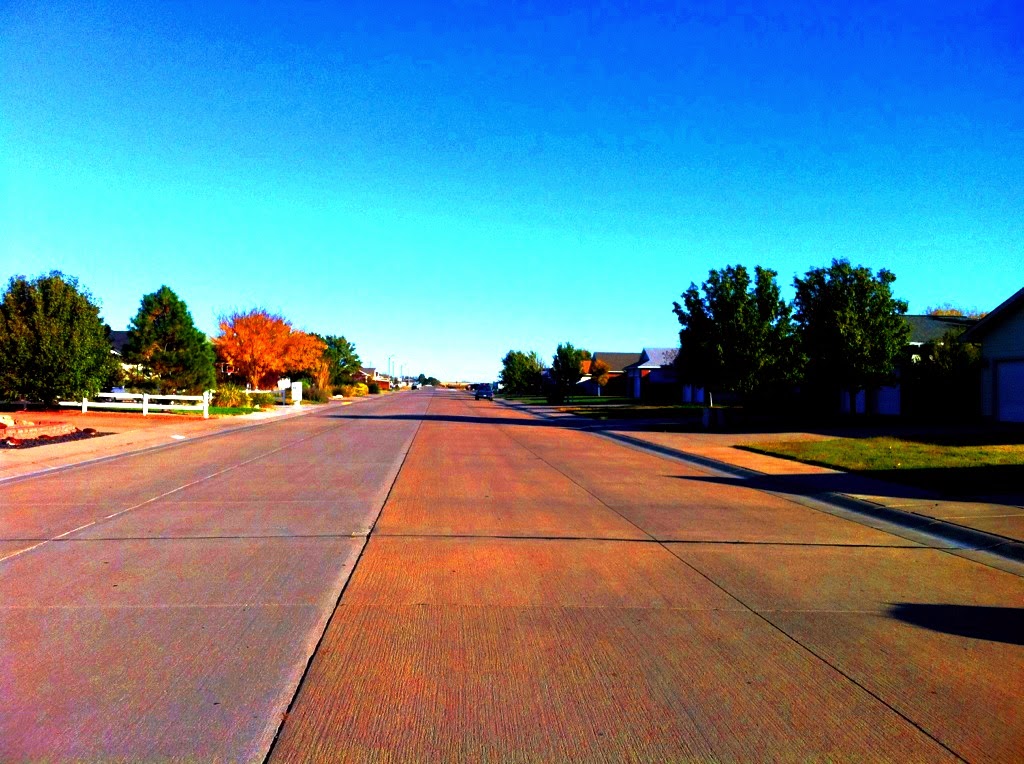 Tumbleweeds blew across the highway, rolling, hesitating, then sweeping on. The sky seemed bigger, without the Northwest's abundance of hills and mountains and trees. Another good bit of driving I did over county highways, well-maintained and nearly empty of traffic other than farm trucks and other beefy vehicles. I took my time, in no hurry and enjoying time with my grandmother and the late fall sunshine.
Streets near where my aunt and uncle live seemed unusually wide--were they designed for storm runoff? Bigger vehicles? But, there were hardly any cars! 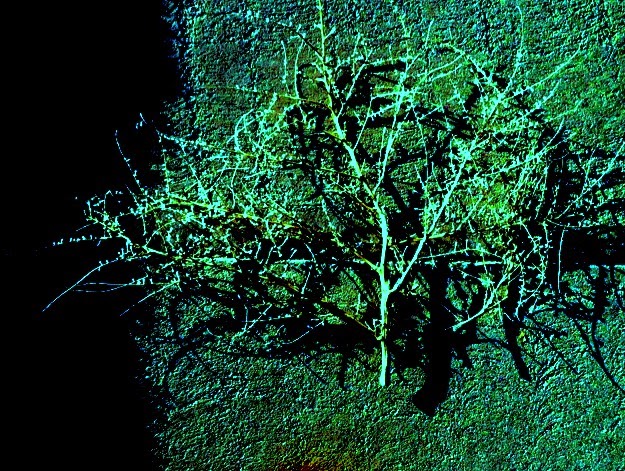 On a brisk morning run I came across a flattened tumbleweed and snapped a photo for a possible future tattoo. 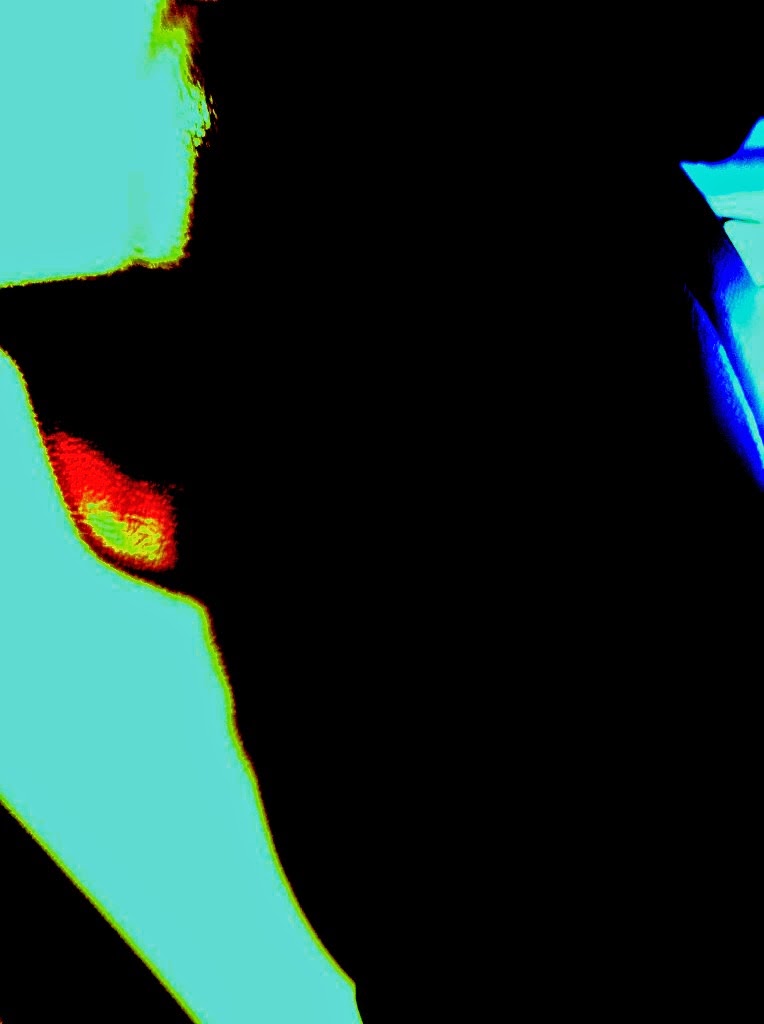 I've been on the road some. It was nice to leave the bubble and nice to return to it.
In the interim, I visited aunts and uncles and cousins and our matriarch, met a new baby and a new husband, drove nearly a thousand miles over the prairie, hung out with a 93 year old and a 5 year old, visited one of the oldest African American settlements in the Midwest, haggled for antiques within shouting distance of the mausoleum at the Garden of Eden, mourned with the locals when the Royals lost the World Series, drank Coors Light and Most Wanted bourbon and Lb's wheat ale and in general had a pretty good time.
The photos are from a road trip reflection in my uncle's seatback, a bathroom wall made of bottles, and a snapshot of a very important box. 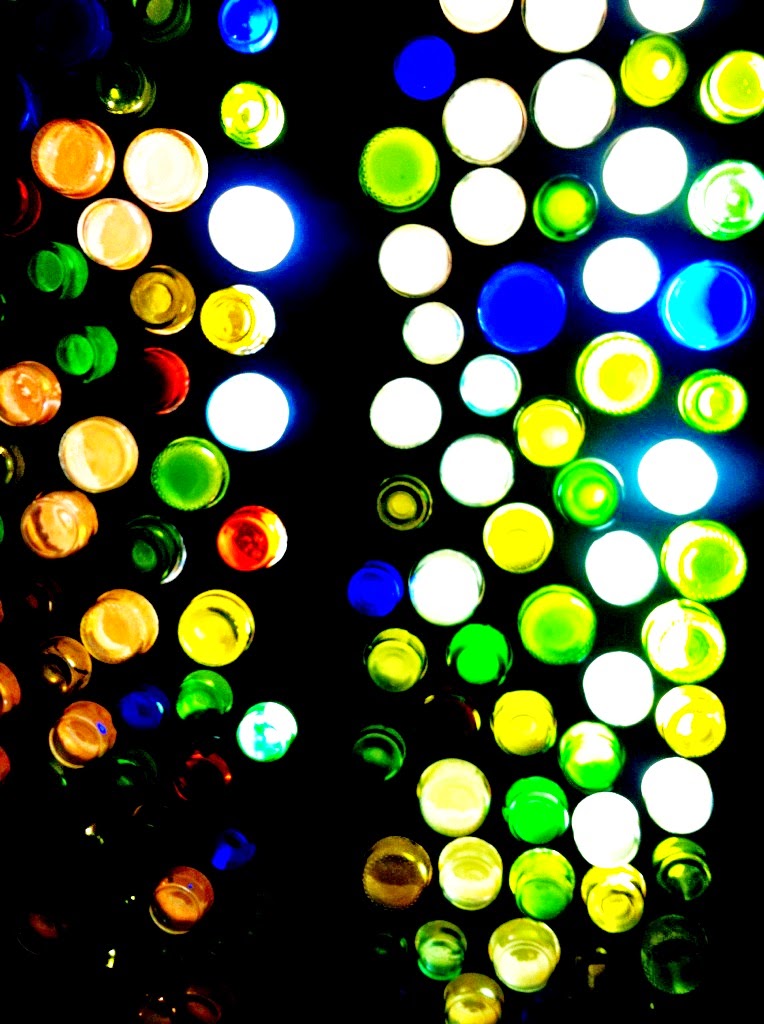 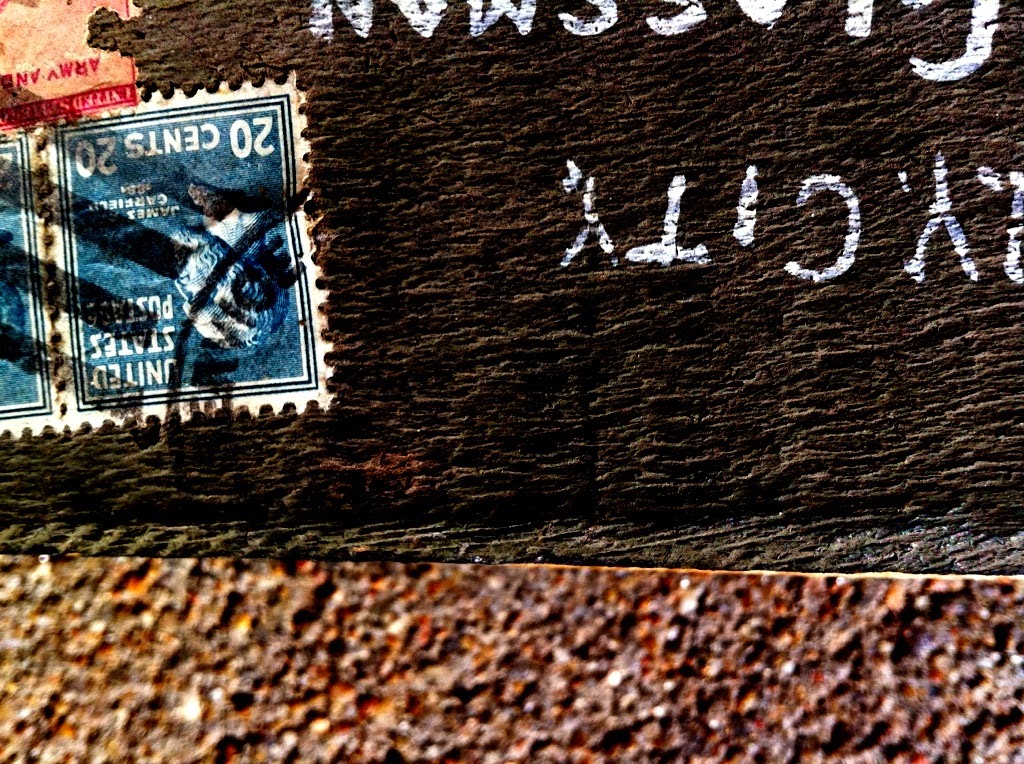 While I was there a family heirloom came back to us, a wooden box that Dusty nailed together and sent back to his sweetheart while he was stationed in Italy during the Second World War. In it he enclosed a necklace from Rome, his Good Conduct medal, and the mushiest love letter this side of a Nicholas Sparks novel. The necklace came apart and is being restrung and we had to dampen the fragile letter to flatten it enough to slide it into an acid-free sleeve, but the trio of gifts is still with family and all together, which in these weird times is comforting and sweet.
at November 03, 2014 No comments: