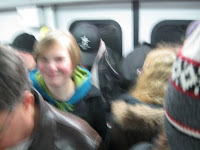 Nationalism.
Patriotism.
Team spirit.
Call it what you like but with the Olympics a mere 3 hour drive north of Seattle everyone's been a little obsessed with medal counts and the uncooperative weather and obscure sports. The funniest thing to me about all this newfound passion is that in a couple of weeks we will all have moved on to the next thing, forgetting bobsleighs and NBC's pitifulness and "own the podium" as though it were the briefest of love affairs.
A friend treated me and some others with tickets to men's curling on Tuesday and I have to say it was a lot of fun! This picture is of the Skytrain fracas. Weird to see people parading around downtown Vancouver wearing Canadian flags like superhero capes but let's just say I got into it. I came this close to buying red cigarette pants with a white maple leaf on the back pocket.
at February 28, 2010 No comments:

Email ThisBlogThis!Share to TwitterShare to FacebookShare to Pinterest
Labels: seen around town 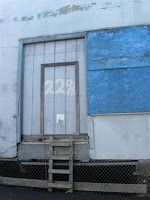 I'm moving this weekend.
Packing has stirred up all kinds of emotions and thoughts.
Sadness of course, excitement, frustration, anger.
Disbelief--I held on to that?
And, so that's where I put that damn thing.
How do you look ahead with energy and optimism, while giving your past its due props? I don't honestly know. I hope I can figure that out without losing my cool too much. Because I've found myself looking forward to my 4 hour dentist appointment tomorrow a hell of a lot more than closing the door on my house in a few days.
*
I spotted this doorway in PA last weekend.
My new address is somewhat--maybe only just!--more respectable.
at February 24, 2010 No comments:

Tagger: Note to Self 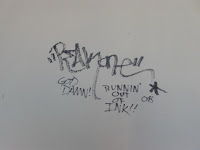 I spotted this tag in a little-used doorway in Port Angeles this weekend.

I'd spent the morning digging a new hole for an ailing tree, then couldn't manage to evict the tree from its too-shallow home without doing residual damage to the roots. So, I cleaned up and headed into town and spotted this graffiti on Front Street.

The parenthetical makes me laugh. Plus, if you're running out of ink, why waste more ink saying so? 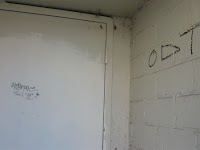 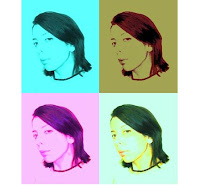 I'm still playing with images of myself.
This may be simple narcissism at work.
A wacked-out self image.
Curiosity.
Fear.
Vanity.
Why don't I push it farther, show myself truly and plainly hideous? Because there are pictures...
*
Right now, I can't do it. Maybe later. Honesty and truth will come.
at February 18, 2010 No comments: 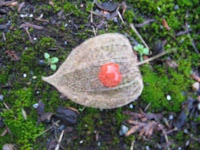 This fragile gem is so beautiful it looks fake, n'est pas? I spotted it on a cold wet ramble a few Saturdays ago. Don't ask me what it is, I don't know astrolomeria from a kick in the ass.
Which, incidentally, is how life is feeling at the moment, as though I went from traveling a flat broad safe highway to navigating some kind of crazy winding mountain pass. The highs are breathtaking and delicious, and the lows make me dig around for the xanax.
I always did love roller coasters.
at February 16, 2010 No comments:

Six years ago today we lost my mom.
It was sudden but not unexpected. I'm still sad, I still miss her every day. Six years on I'm no less resigned, in fact I'm still pretty pissed off about it.
However, I also realize I'm lucky to have had such a good mom. I'm lucky to have my sisters and aunts and cousins and nieces and a very feisty 88-year-old grandmother who remember her and feel that twinge of sadness with me today.

Email ThisBlogThis!Share to TwitterShare to FacebookShare to Pinterest
Labels: mom

What you notice walking across the I-5 overpass on NE 45th is that someone has systematically applied paint splotches to the top of each metal balustrade, and given the eight lanes of traffic humming along below, there are quite a few metal posts. Each splotch is about the same size and shape. Some are green, others blue like this one.
*
What you also notice is that when you stop to take a photo of the splotches, drivers above and below start nervously braking and looking at you: Is she a terrorist? What's she doing taking pictures of a bridge? Is she going to jump?
at February 13, 2010 No comments: 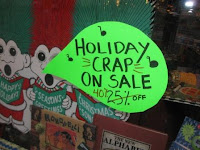 This needs no commentary really.
Crap on sale, courtesy of the same genial shopowner I wrote about a few months ago.
at February 09, 2010 No comments:

The New Yorker published several remembrances of J.D. Salinger this past week. The most affecting and personal was by Lillian Ross. (Full disclosure, I've read Salinger but I'm not unhinged about him--sort of like last week I confessed to not being much of a Beatles fan and by the bug-eyed stares at the table you'd think I'd admitted eating babies. But I digress.)

Ross describes Salinger's work ethic ("long and crazy hours") and his disdain for pretty much all other writers ("book-selling louts and big mouths"), most vituperatively, Truman Capote. While I get this, I struggle with it. Can true genius simply not abide the other 99% of the human race? Salinger of course had a deep and complex understanding of humanity which he was able to translate into superior fiction, so I guess this earns him a pass.

And there's this: “When I sit down to work. . . . just taking off my own disguises takes an hour or more." Considering his mad skills, I wonder if I've ever even gotten the mask off once.
at February 06, 2010 No comments: 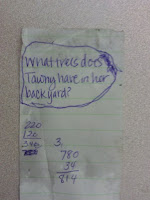 My sis posted this found note for me to her Facebook page.
"What trees does Tawny have in her backyard?"
Is this code for something?
Actually, it reminds me of the wartime Agatha Christie novels: Why Didn't They Ask Evans?, or N, or M? Strange title, unfamiliar protagonist, pseudo-modern plot.
Nonsensical and strangely comforting.
at February 04, 2010 No comments:

So check out this video. It's re-posted from Nico Nico Douga (warning, I don't know the Japanese for "re-write your disk" so click at your own risk) which is a video sharing website that apparently hosts all kinds of video game and music video mash-ups. (Wikipedia tries in vain to make sense of it all.)

I've watched this one a couple of times and marveled. Each bitmap image seems to be projected onto a square that moves around an interior room. Clever, mesmerizing, amazing.
at February 01, 2010 No comments: