I'm heading out of town for a few days. Keep an eye on things while I'm gone, would you?
If you see any great graffiti or overhear something juicy, drop me a comment with all the details.
There'll be lots to discuss when I get back.
at September 30, 2009 No comments:

Email ThisBlogThis!Share to TwitterShare to FacebookShare to Pinterest
Labels: travel

Check out Jon Katz's interview from earlier this week on KUOW.
He's a writer/farmer who thinks, writes and blogs about the human/dog relationship.

Agreed that we humans have unnatural love for and expectations of our pooches. Right? Wrong? Ask me after I pick up mine from his dogupuncture appointment.

Dare I add that we've super-anthropomorphized our kids too? One visit to weekend soccer--gushing dads, moms yelling strategy tips to oblivious five-year-olds strapped and padded with their body weight in protective gear--ought to be enough of a clue. And I thought Kicking and Screaming was fictional satire.
at September 27, 2009 No comments: 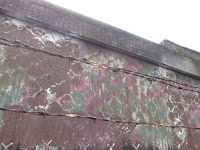 A friend and I were chatting yesterday and suddenly she told me something very personal, something she said almost no one knew about her. It was clearly upsetting to her and strangely, it was an experience I had had as a kid, too. Why, we wondered, was this thing still so painful to us? Why couldn't we leave it behind, what did it have to do with who we were today?

I saw this wall a few weeks ago and stared at it for a long time. You can see the imprint of old chicken wire against the cement, kind of like that persistent thing in our pasts. The chicken wire is long gone but the outline remains. I think what's left is prettier than the original ever could have been. It makes me think that the echoes of old painful experiences may ultimately add a certain beautiful interest, a patina to my friend's life, and--I hope--mine too.
at September 26, 2009 No comments: 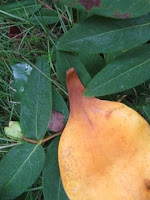 I found this petal on a walk this morning and brought it home.

Remember when you were a kid and your pockets were always full of stuff you had accumulated during the day?
I just inventoried the pockets of the jackets hanging by my back door.


I love finding forgotten money in my pockets, but I can never find a bobby pin when I need one. It's the flotsam of life. It's what archeologists will be digging up in a hundred years and trying to piece together our stories.
at September 18, 2009 No comments:

Today, feeling like I got nothin.'
Except this link, my go-to when I need a laugh.
at September 13, 2009 No comments:

Email ThisBlogThis!Share to TwitterShare to FacebookShare to Pinterest
Labels: links

Are oddballs the instruments of Deus ex machina?

Some weirdos have been crossing my path lately. Mom always attracted the strange ones. A mentally disabled guy was in love with her for years. He'd stand on our porch and call to her through the screen door: Beautiful Mary!

Last week I took the dog out for a 6am run. Toward the end of it, we approached a thin figure in a black hoodie striding along the sidewalk. We went around him; then I looked over and the guy was running alongside us, muttering to himself. Oh honestly, I said, and sped up. And he kept pace with us, talking louder. It was barely light out, so even though I was tired and only 3 blocks from home, I did the smart thing and turned back, and took the long way back to the house. No sooner did I walk up to it but another guy materialized. A big guy in a polo shirt, waving his arms and lurching around on the sidewalk. Harmless fellows both, I guess, but you never know.

Over the weekend, I was in Vancouver and again took the dog out for an early morning spin around the block. We passed a guy carrying a large duffel bag. He ignored us, instead flipped open a Dumpster lid and hollered up at the apartment above: it's 7.20 a.m., wake up! Pooch and I came back around the block and Mr. Dumpster Diver was just exiting the alley. This time he made eye contact. This is the forty-thousand-millionth time I've seen you today, he said, not angry, but exasperated.

So, what's the key, or is there one? I talk to myself sometimes too. I'll kill myself running so as not to be passed by another jogger at Greenlake and I've certainly been known to pick up free stuff off the sidewalk. One person's Dumpster diver is another's freecyler. One person's loon is another's--well--me.
at September 10, 2009 1 comment:

Email ThisBlogThis!Share to TwitterShare to FacebookShare to Pinterest
Labels: overheard, seen around town 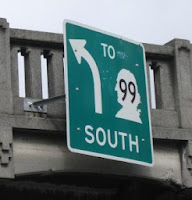 I chuckle every time I walk under the Aurora/99 overpass in Fremont. In addition to the "official" highway sign featuring Geo. Washington, there's another one painted on the concrete pillar. Only the ad hoc George has a bigger nose, a stronger jawline, and a substantial chignon.

Usually I'm a fan of inanity.
Usually I love the little conversations going on all around, the little politenesses, the verbal bread crumbs that remind us how we got here and where we're going. The bright connective yarn threads on the hook rug of life.
Usually, but not always.
Due to some changes in the office, I am now aggressively greeted every morning.
Good morning, how're you? If I manage to lift my gaze from the carpet, the greeting is seasoned with a broad, welcoming grin and just the hint of a wink.
Good morning how am I at 7.28 a.m. on no caffeine and an SRO Metro bus ride?
!
So far, I have kept a lid on it. I grunt something that resembles good morning--a series of sounds reminiscent of those German Shepherds that bark "Jingle Bells." It's a sound, but hardly human. If I extend myself any further, I might have to address the how are you. And that would really be pushing it.
at September 01, 2009 No comments: