I'm feeling abandoned and unimportant.
There's no one to discuss this with. How would I even start?
Which leads to, I'm feeling mad at myself for not doing the things I know I love so that the first thing doesn't matter so much. So, enough of the Pity Partie and onwards to photos, music, people, writing, creating, laughs, art, and the night.
*
Re-reading the biography of Edna St. Vincent Millay, I wish the author wasn't so coyly trying to understand-slash-explain ESVM's dichotomies. Why couldn't she be passionate and an addict and wildly creative and loving and cruel, a terrific and terrible spouse, a woman known widely and not at all? Hello, almost every male writer evar. The sexist double standard endures, no, it flourishes.
at January 31, 2015 No comments:

I wore my Seahawks beanie in New York City a couple of Sundays ago, before, during and after the championship game versus the Packers. You want to talk disbelieving, unbridled joy? That was us during the final few minutes, a gang of out-of-towners and New Yorkers, having taken over an Irish pub in Williamsburg that didn't take credit cards, reluctantly changed the channel on one TV to the game, and didn't even want to turn up the sound. By the time we left, there was football on all 3 TVs, blaring sound, high-fiving and much giddiness. That hat was my ticket to fist bumps, cheerful yells, and more than one whiskey shot.
*
The trip alternated between intense busy-ness and suburban boredom. We hit the city fresh off the Jetblue redeye on a twenty-degree weekend morning, introduced my niece to the NYC subway courtesy of a napping homeless guy, the seat of his pants blown out with poop or what looked like poop. Coffee and bagels at The Bean, a quick freshening-up at my cuz's place in the East Village, and then off to the Staten Island Ferry, where the freezing breeze stiffened our grins into grimaces, but we sailed past the Statue of Liberty twice, gratis! Next, warm-up, lunch and bloody marys on Stone Street, then a wander through the World Trade Center site. Thirty minutes at Century 21 was time enough to examine some three thousand dollar gowns and set out for TKTS, in a futile quest for show tickets. Finally, we slowed down enough to nap, then had a delicious Italian dinner at Spina, strange and   delicious desserts at Momofuku Milk Bar, and then the next several hours roaming the lights at Times Square, us and a million tourists and a forlorn Cookie Monster staring up at a Jumbo-Tron.
Sunday: rain. I made a damp jaunt to Tompkins Square Bagels for breakfast, then we schlepped uptown to check out Dylan's. Our attempt at Central Park failed, due to extreme wetness, sleet, and sloshing shoes, so we abandoned ship and went to the Plaza food court, for Payard macarons, local coffee and pastries. Then it was time to dump our stuff and head for the Irish sports bar! Later on, after another trip to a different Milk, we packed into an Uber SUV, grabbed up some bodega beer and snacks, and crashed a spectacular Brooklyn pad, with a killer view of the city, sorta watched the Pats/Colts blowout, drank and hung out and admired the city.
Monday, with little time left, again uptown to Ess-A Bagel, where elderly Abe regulated the line. Then onward to the Waldorf Astoria, where a buddy gave us the grand tour and we admired Frette sheets and the gloriously mismatched furniture in the penthouse suite. A quick stop at Uniqlo and then a cab to Grand Central, where we parted ways, some to JFK, another to Metro North, and me to a hotel on 39th St.
I saw friends for the next day, met a pal from Zambia days in Chinatown, hung out with my cuz on the LES, lunch with a lovely lady in Midtown the next day, and a hangout at the aptly named Coffee Shop in Union Square the next afternoon. Then, sadly, time to head to the 'burbs, I stocked up on whisky and snacks and found a quiet seat on a Connecticut-bound train.
at January 30, 2015 No comments:

Email ThisBlogThis!Share to TwitterShare to FacebookShare to Pinterest
Labels: nyc, seen around nyc, the fam, travel

New story alert! "Hard to Believe," in the East Bay Review.
Also, Your Impossible Voice notified me last week that they'd deposited $0.25 for royalties in my Paypal. I'm not sure whether to be happy about it or depressed.
Four more quarters and I can do a load of laundry.
at January 26, 2015 No comments:

Thanks Moore Coffee for the sweetest mochas I've seen in awhile. A delightful note to a weekend full of happy moments. 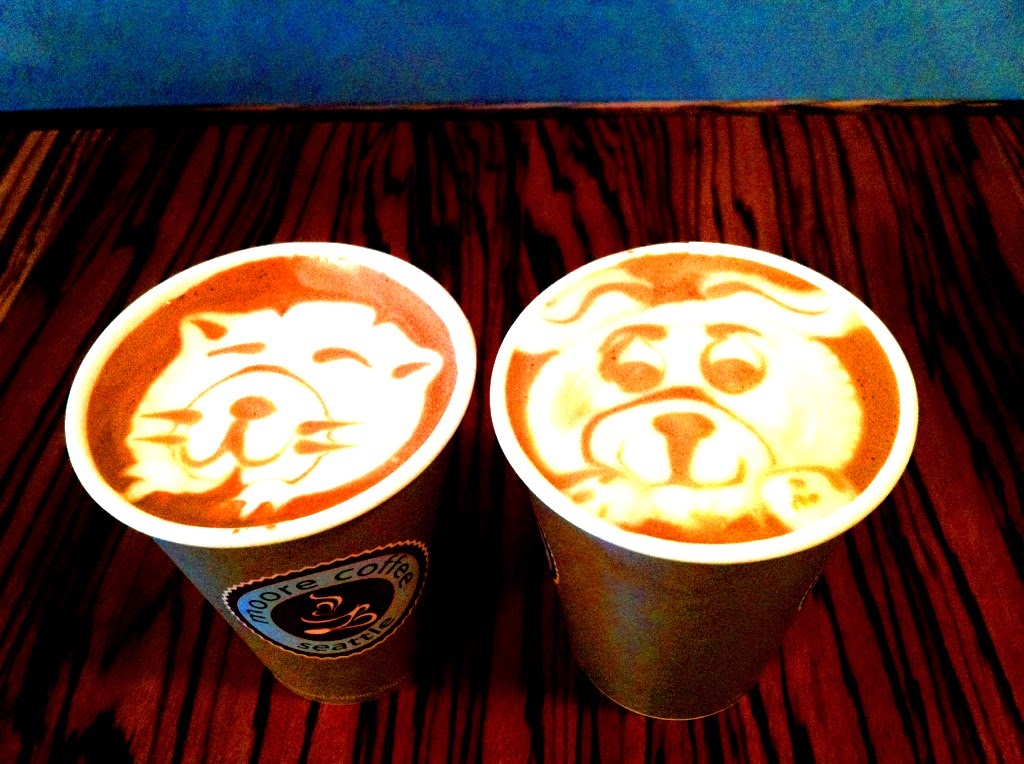 Email ThisBlogThis!Share to TwitterShare to FacebookShare to Pinterest
Labels: birthdays, seen around town, the fam

So here we are in 2015 and it feels both fresh and familiar.
The days are surely getting longer, aren't they?
It's been a tough start. Tbh, I'm feeling lost, anxious, fretful, not quite sure where I belong.
Who's my tribe? What the hell am I doing with myself?
I rang in the new year with good people, partied late and slept late and enjoyed a brisk sunny afternoon restorative walk. The next day dawned misty and cold and I went to a friend's dad's funeral, sat among long-time friends and contemplated life and loss and love. I heard the priests talk about God and Heaven and I wondered, do people really believe this? I did, for a time. Can I begrudge them the small comfort of believing their loved one has passed on to dwell with others who have gone before?
I think I can. This fantastical belief, against all facts and sense, it serves as an insulation from the reality, that life is short and difficult and exhilarating and we'd best spend our time not listening to some tired old man's querulous ideological interpretations of mythological deities, but instead, helping each other, taking care of each other, loving each other, finding and bringing what joy we can during our brief awake time on the planet.
*
Then I go get coffee from ETG and find the front door window covered in plywood. A man broke in at 11.30pm Saturday night, and is on security camera rifling through the cash register, making away with a couple of rolls of quarters. 11.30pm on a Saturday night in Fremont--party central for much of twenty-something Seattle, and no one stopped or called the cops? Apparently someone else happened along and went inside too, to poke around. No coffee was stolen, none of the delectable pastries, not the enormous Kitchen Aid or the espresso machine. The antique mall was targeted recently too, the barista told me. A man in a trench coat walked out with a bearskin rug. Someone else made off with several of her rings. For crying out loud, Seattle, what is happening to us? Who the hell are we?
at January 04, 2015 No comments: