this playlist is fire

Re-watching Season 1 of HBO's Insecure. Lurve me some Issa Rae and friends. The soundtrack is fire, ya'll. Click and enjoy or click here and enjoy even more.
You're welcome.
PS: a standout:

Memoir Quest (TM) continues.
Thank zeus for the Seattle Public Library, because if I'd bought the last batch of memoirs with my own cash, I'd be mad about the stack of half-read tomes lying around the house.
Including:
I'll admit it, after Didion I took a break and read some Lee Child. Jack Reacher is a literary gem and always features some damn fine writing to boot.
Both the memoirs (unlike Reacher) had prologues, of a sort. Still, completely unnecessary. I skimmed and then skipped.
I only made it through about 3 chapters of Lipstick Jihad. The writing approach felt like a long look down memory lane, hastily translating the scenes even though I hadn't quite focused on what was happening. I wanted more immediacy. I wanted to feel the incongruity and fear and loveliness of being an Americanized Iranian in Iran. I'll probably just re-read Persepolis.
Going Solo is the second half of Roald Dahl's memoir. On a previous reading, I was intererested in the scenes in Tanzania and around East Africa. What I hadn't remembered was the embedded, casual racism towards most Africans. No surprise, but unpleasant reading. I forged ahead to the battle scenes, as cinematic and powerful as any cold-eyed war movie.
So much killing and fighting and dying and here we are again with Nazis in the streets. Deplorable!
at October 27, 2017 No comments:

the philosophy of KL

This evening's writing soundtrack. Sick beats and a fresh video from one of my favorite philosophers, Kendrick Lamar's "Humble."

A good friend came out to me this week. Not in a dramatic, Ellen "I'm Gay" fashion, more as a casual aside.
As though I already knew. I didn't, I guess.
We've talked over the years of course about dating and sex and partying, but never in a gender-specific way.
I feel trusted, in a way. Closer. After all this time we've forged yet another bond.
*
Also, the new barista at my favorite coffee joint was super chatty this morning. We've only interacted a couple of times and they seemed shy and cool and I sensed I'd need to be patient, even though my inner Momash loves chatting up interesting people.
Today though, we talked up a storm! About the beautiful gloomy misty weather, and the absurdity of the Ducks aka murder vans.
Happy productive and peaceful Saturday, y'all.
at October 21, 2017 No comments: 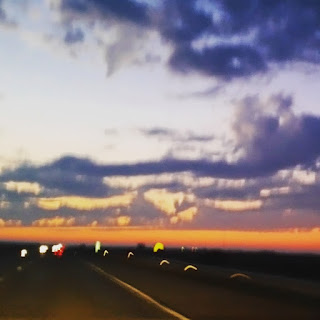 I spent a couple of days in the 785 this past weekend. With my people.
Where I'm from, technically, but also technically have never really lived.
It feels good to smell the prairie after a thunderstorm.
Never mind that paralyzing terror of experiencing said thunderstorm at thirty thousand feet.
Not to mention the incredible skies after said storm. All shades of blushing sherbet.
*
It feels so good to see family, to hold an elder's hand, to hear voices as familiar to me as breath.
To cackle with laughter over a remembered story. 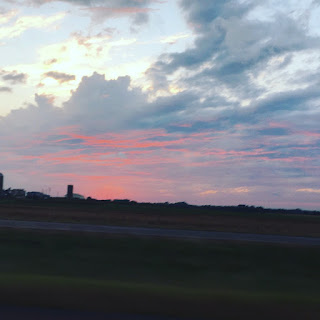 To walk the same cracked sidewalks, remembering the spring and scratch of buffalo grass underfoot.
*
I try to stay within the moments, not fearing the future, not dreading the coming absence. We have each other, and we have the place. That much we'll always have.
at October 18, 2017 No comments:

Email ThisBlogThis!Share to TwitterShare to FacebookShare to Pinterest
Labels: kansas, lurve, the fam

It's been a common refrain lo these past few months, post-Cosby, post-45 and now with the gross news about one of Hollywood's biggest bigwigs.
Everyday sexism.
Did I say gross? Gross. Ugh.
My ladies know what I'm talking about.
I needed supplies this week for a project, and one item was unusual enough that I decided to call a few hardware stores. I've been doing DIY projects for a long time and despite what you see on TLC, it's still a dude-centric world. Case in point, the old-timer at the Ace Hardware in my old neighborhood who--when I asked where to find wax seals--tried to talk me out of my plumbing project. It's hard to imagine him doing that with a male customer.
So, this week's project. The guy who answered the phone at the first place I called, Stoneway Hardware, laughed when I asked about the product I was looking for. No, he chuckled, we don't have it. Would you know someone in town who might? Another giggle. Try Dunn Lumber.
I called Dunn Lumber. The guy who answered the phone said, No, we don't have it. Any idea who might? Stoneway Hardware maybe? I just called them. The guy laughed at me. Dunn Lumber guy, to his credit, put me on hold to ask around. Maybe Hardwick's? he hazarded.
Hardwick's phone was busy the 8 or 10 times I called, so I went by on my lunch break. Their sales guy--a notoriously reticent crew anyway--pointed me towards the wrong aisle. This is all we got.
So, I ended up going to a box store. I found what I wanted with no help, in about 8 minutes. A female clerk checked me out.
There's no moral to this story. I experienced about what I expected to experience. Cam Newton's comment this week was no surprise. It's still a d00d's world, and we're just livin' in it.
at October 07, 2017 No comments:

Email ThisBlogThis!Share to TwitterShare to FacebookShare to Pinterest
Labels: asexismthang, heard around town, seen around town

Super excited about a new story published October 1 by Sliver of Stone Magazine.
"Fast Food and Box Wine is a tale of the single life, family secrets, absent fathers, tattoos, and yes, a box of wine.
at October 05, 2017 No comments: