more books! a bike tour and some intrigue

It's Pride weekend in the 206 and some friends and I went to the Trans Pride parade Friday night.
This was the biggest Trans Pride parade in Seattle history.
There were rumors that right wing groups would continue their harassment and hate. As my friend said, Hate is bullshit.
As she and I waited at light rail for the others to catch up, we witnessed a stream of marchers exiting Cal Anderson, on their way to line up for the march. It was a giddy assortment of folks, some with signs, some in costume or festive garb, others simply showing up in street clothes, as themselves.
Across the street at the construction site, the workers in their reflective vests and helmets had apparently just gotten off work and stood behind the chain link fence, watching in quiet fascination (I hope).
Worlds peacefully collided for a moment.
Later, as I stood on the curb cheering and chanting as the marchers went by, I saw many expressions reflected on the passing faces: pride, happiness, surprise, defiance, and maybe caution.
It takes a lot of courage to stand up and march.

Email ThisBlogThis!Share to TwitterShare to FacebookShare to Pinterest
Labels: 206love

i want a president

This. Wow. If this piece by Zoe Leonard hurts your soul or puzzles you or provokes in you some contentious feelings, then thank a teacher somewhere that you can read, and remember the role of writers in this world, to afflict the comfortable and comfort the afflicted. 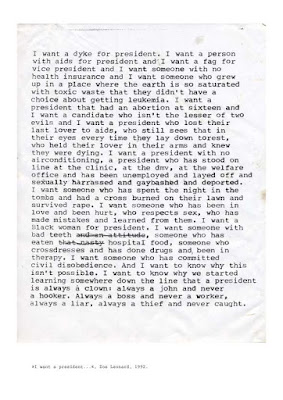 Just returning from a couple of days' staycation.
A restorative 48 hours.
Friends and beach time and bar-hopping in a couple of old-school neighborhoods.
Now, back at it.
"It."

the consequences of truth 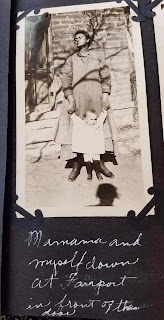 It's been weeks of emotional heavy lifting since losing Marguerite, realizing what she had left all of us, and then, two weeks ago, finding among her things a stack of handwritten note cards written by her mother, my great-grandmother. The cards seem to be preparation for writing a memoir--Nan noted she'd need 100,000 words--and are written in a fine, sometimes quite tiny, cursive, as though not quite giving herself permission to express what she was putting down on paper.
*
Because. There is death and despair, a murder, a suicide, and many tales of abuse and alcoholism. And also wonderfully frank observations of neighbors and lovely observations of nature--a pond, wildflowers, wagon rides.
*
It changes you, thinking about your relatives in this way. Staring at the black and white photographs from a hundred plus years ago, realizing that they are actual people and not quite the sainted relics we've imagined them to be. They loved and fought and hated and struggled and triumphed. My grandmother and great-grandmother are two of the strongest people I've ever known, and now, I'm realizing what all the hard times exerted and wrought on them, diamond-like.
at June 15, 2019 No comments:

Email ThisBlogThis!Share to TwitterShare to FacebookShare to Pinterest
Labels: anyways, bsp, seen around town, the fam

Pleased to announce that I have a story out this month in Spank the Carp, a lively and interesting literary journal. This story--"The Accidental Contestant"--is one I wrote wondering What happens if?
Always a good jumping-off point for a writer.
at June 06, 2019 No comments: