The secret of life, as determined over martinis last night.
Don't be a dick.
So simple and so strangely hard to achieve.
at July 28, 2012 No comments:


Boyyeee what a way to end a weekend, at a sold out Snoop Dogg show.
Dyme Def was the second opener, loooove those kids and hope to see a lot more.
But we were there to see the legend, and he did not disappoint. Chill, charming, fly, he had everybody dancing and smiling.
At the bar, my friend asked the remarkably relaxed bartender: what exactly is the "juice" in gin n juice?
(I especially heart this song after Nosaj Thing ended his Neumo's show last year by cueing it up and simply walking offstage.)

There were times I didn't think I'd make it through this week. Grim events have lurked and materialized, and I'm soaked in weariness.
But also in the past 7 days, I've met some super cool out-of-towners. Seattle is known--and despised--for its freeze, for its surface friendliness and veneer of hostility. Sometimes I feel I'm on a personal mission to dispel the myth. Last week at the Eldridge show my pals and I met some Portlanders, goofy musicians who showed us YouTube videos and drank PBRs and did crazy dances. At the end of the night we all went our way, no numbers exchanged, just smiles and good-bye.
Tonight, I went to a nearby bar for a beer and some dinner, alone but not lonely. I met a funny pair from Cle Elum, in town to drink beer, see friends and valiantly attack a gigantic bowl of potato chips. She works at a chimp refuge, he fights fires. For an hour we shot the shit, laughed and bonded, and then I settled my bill, shook hands, and peaced out.
Tomorrow I have no plans. It may be the first time in a long time. I need it. I'm ailing. I need to summon my strength.
at July 20, 2012 No comments: 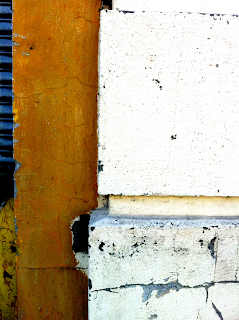 Lots of good-byes lately.
A couple of friends moved away. A few more are thinking about it. Some old friends are distant. I shared long hugs today with one of my favorite people who is leaving the country for a couple weeks. We pretend-cried but after she left I held back real tears.
I'm not good at good-byes. I hate them. I even hate "see ya later." To me it's all bad-byes. (Bad-bye always makes me think of Homer
And yeah I know it's all cyclical and death is a part of life and good-bye is necessary for hello, I know all that.
I know it. Now I gotta learn to live it.
*
Photo is along Dexter Avenue a few weeks ago.
at July 15, 2012 No comments:

Email ThisBlogThis!Share to TwitterShare to FacebookShare to Pinterest
Labels: seattle, the fam

Happy July y'all.
I've been busy, working like mad on a story draft, planning trips (look out Denver, Kansas, Connecticut, Dar es Salaam, and London).
The Fourth was one of the best in awhile. I slept in, went for a long run, wrote a little. The hopped a bus, laden with beer, a chilled rose, brownies and onion dip, and went to the beach to a good friend's bbq. We had a lazy afternoon of sun and drinking and catching up; an artist friend took a break and biked over, another friend joined later and drove us to my sis's bigtime event, patio bbq with the fam and then fireworks--mortars, roman candles, black cats, bottle rockets, and assorted other explosives for the kiddies.
I emerged with the only injury, my thumb knuckle blasted and blistered after a little girl waved her freshly-lit sparkler too close. Later on we walked to the lake and watched the official show, then capped off the night with a firecracker fight, the kids wrapped up in blankets, laughing at the bigger kids playing with fire.
Still rocking the band-aids and ointment, but regretting nothing.
at July 11, 2012 No comments: