Backstage at the Triple Door

Last night I had the opportunity to play the part of a hanger-on. My friends John and John had tickets to see Justin Bond's "Rites" show at the Triple Door, and when I arrived at the venue a little after six, we were pointed backstage. Backstage, moi? For reals? Me, I can barely get into secret screenings at SIFF.

Little did I know that my friend John was acquainted with Justin, and with musician extraordinaire Our Lady J, through John's brother, a well-known artist and New Yorker. So--we hung out backstage, sipping martinis and watching the pre-show show. It was as glamorous and cool as I'd ever imagined. None of the performers--Justin, slender and calm, nor OLJ, with her killer cheekbones--seemed nervous. There were bra adjustments and plates of picked-over Asian food, a search for lost glasses and much archly hilarious, off-the-cuff commentary. There was some spying, too, one eye peeled for a particular audience member about whom Justin had written a song years ago. I just wonder if he's still hot, Justin said, in his careless whiskey voice.

We all had a look at the person later, and agreed: Not.

I caught the last 75 bus out of Ballard Friday night--it was a cold night, rain spitting, the wet streets overrun, for some reason, with ladies in skirts and heels.
Just after we turned off Market Street, a pair of twenty-something guys boarded the mostly empty bus. They sat up front on opposite bench seats, hunched over, faces pallid in the ghostly Metro lighting.
"What you don't want to do is mix ativan and dilaudid," one of the guys said. He had short dark hair and wore a hooded sweatshirt, keeping his fists jammed in the pockets.
The other guy--slender and bearded, with a tartan cap and a backpack--said softly, "I know a guy who took ativan, dilaudid and Chloraseptic, and now he can't remember an entire week."
Both stared at the floor for awhile.
"So if it comes to standing up for yourself, or leaving a party, what do you do?" This, abruptly, from sweatshirt guy.
"Oh, leave the party," tartan cap guy said, looking alarmed.
"What if the party's at your house?"
A pause. I closed my book, interested. Tartan cap guy started to answer. "Next stop, Greenwood Avenue," the driver intoned, over the intercom. Drowning out tartan cap guy.
Sweatshirt guy sat up, animated now. "If the party's at my house, I keep a baseball bat handy."
"A baseball bat--"
"Covered with duct tape," he added, swinging the imaginary bat.
Tartan cap guy was shaking his head. "No no. Call the authorities. You call the authorities immediately."
Sweatshirt guy hit the cord and stood up, shaking his head. "Nice talking to you. My name's Jay." They shook hands, and he left the bus, pulling up his hood and swaggering off into the night.
at March 28, 2009 No comments:

I'm not much of a horn-tooter but I was very pleased that Neon Beam, a UK-based literary journal, included one of my stories in their March 15 edition.
If you want to check it out, go to their site and click on Current Issue. I start on page 47.
at March 25, 2009 2 comments: 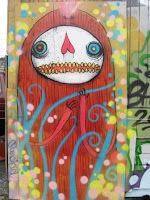 A friend pointed me to a treasure trove of street art (thanks Maggie) covering the derelict building that used to house Tubs.

I went by yesterday and will be posting more of my pictures in days to come, but here's one of my favorites. There's such a lovely, melancholy, NMBC aspect to this piece.

I'm reading that the site art is the work of Free Sheep Free, a band of itinerant artists. How great is it that Seattle is becoming groovy and crunchy and creative again.

Email ThisBlogThis!Share to TwitterShare to FacebookShare to Pinterest
Labels: crap

Rain is the lens 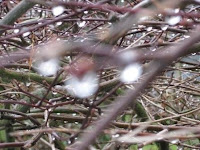 Seattleites complain a lot about the rain.
I know I've mentioned this before. I guess it still surprises me. You'd think we'd be used to it, the way my Midwestern Grandma is philosophically stoic about tornadoes, and hot weather. But you'd be wrong.
I find the rain beautiful. On a long ramble last week, I saw that clouds had filtered the light to this kind of silvery haze. Raindrops acted as prisms, turning bare branches glittery, studding the graceful curve of an early tulip leaf. It was as though Liberace's tailor had just passed through my neighborhood with a Bedazzler. 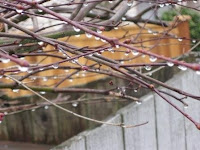 A few years ago I attended a writer's workshop at Iowa University. It's a prestigious program and we were lucky enough to have Marilynne Robinson as our professor. She had gotten her MA in Seattle, and her strongest memory of her time here was that her shoes had succumbed to the cold and the damp and finally rotted. At the time it annoyed me that she focused on such an ugly detail about my fair city. As the weeks wore on, though, I realized that living in Iowa City was a deliberate choice. She loved her adopted state--its flatness and open spaces and reticent residents--for all the reasons many people, me included, might not.
So, I love Seattle for reasons other might not. Yes, rain. And that's okay.
at March 18, 2009 No comments:

Email ThisBlogThis!Share to TwitterShare to FacebookShare to Pinterest
Labels: rain

I want to love you, Trophy Cupcakes. I truly do.
Despite the pick-up hassles, I found your Obama cupcakes (Obamaaaaah) both delicious and inspirational, just like our president.

And yes, I knew that dropping by for a dozen cupcakes on a Friday night at 7 was risky. Even when I saw that you were down to a handful of flavors, I resolved to be pleasant and make do.

But why did you allow--not just allow--encourage--that mean old lady behind me to jump the line and bogart 2 of the remaining 4 chocolate cupcakes?

Yes, I know turning on my heel and walking out was immature. I gave myself a good talking-to outside and came back to apologize. When I ran into the mean old lady exiting with her chocolatey treats I did not wrench them away from her, I did not curse at her or laugh at her double chins. I simply said, You should be ashamed of yourself and she agreed and quite meekly apologized.

So why were you so unhelpful when I came back to you, groveling and apologizing, and explained my sitch (birthday, poor planning, yesimanidiot)? Why did you tell me you were unable to take an order for one dozen assorted cupcakes for tomorrow? Why did you tell me instead to call your order line, and then when I went out to my phone to call said order line, why did you--the very same you--answer the phone and tell me the order line was closed? What kind of nitwittery operation are you running?

I want to love you, Trophy. You are beautiful and tasty, but oh so cold hearted. Next time I need my red velvet fix, I'm going to check out one of the new kids in town -- Kimberella perhaps, or Look, or even reliable old Macrina.
at March 14, 2009 1 comment:

Email ThisBlogThis!Share to TwitterShare to FacebookShare to Pinterest
Labels: cupcakes

I say it because it's true 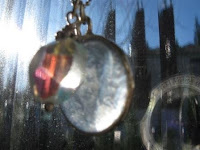 I'm not what I'd consider a sentimental person.
I've tossed out nearly every letter my mom wrote me during my college years -- and there were a lot: these were the prehistoric days before e-mail, and it took me almost 8 years to graduate.
So -- no record of my mom's letters, her small, precise cursive, her cheery greetings, her corny jokes.
But I do still possess my original Pee-Wee Herman Fan Club t-shirt.
And my M-m-m-max Headroom mask.
And my chunk of the Berlin wall.
It's anyone's guess why I kept the junk and threw out the good stuff.
My sister has been making beautiful art out of the good stuff.
Not long ago she gave me this necklace--it's a resin photo of my grandma when she was a young woman, when she wore red lipstick and high heels. My sis paired it with a vintage crystal. She makes such treasures for a living. You can see more on her site.
I have to say though -- I'm pretty sure a Pee Wee Herman resin charm would sell like hotcakes.
at March 11, 2009 1 comment:

Email ThisBlogThis!Share to TwitterShare to FacebookShare to Pinterest
Labels: the fam

We do this exercise at work called The Five Whys. You take a situation and keep asking Why. It's designed to help you get to cause and effect. (Here's a fun example.)

I like it because you get to channel your inner three-year-old.

On my 2-hour ramble around town yesterday, some Whys came to mind:

Today is my niece's 15th birthday.
She was a late baby. Didn't want to come out and meet the rest of us.
Her mom and I walked around the mall for hours the day before she was born.
Now we can't imagine life without her.
She's a tall, agreeable blonde, a reader, a mad gamer, a prankster extraordinaire.
All grown up, until a look passes between her and her sister. Or her little cousin. And then it's all laffs and giggles and falling down.
That's what I wish for your birthday and pretty much forever, JKres.
Giggles and laffs and not too much falling down.
Love ya lots.
at March 04, 2009 1 comment:

Email ThisBlogThis!Share to TwitterShare to FacebookShare to Pinterest
Labels: the fam 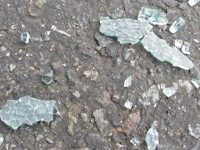 I met up with a friend the other night for a drink.
This friend--let's call her N.--has been through the wringer lately.
Crap at work, crap in her relationship, just a general and unremitting crap-fest.
So we met up at a neighborhood joint for drinks, conversation, and some laughs.

Afterwards, I walked home. N. headed for her car and found her front window smashed, and her laptop gone.

Insurance will replace the window glass, and the computer. But her files are gone. As is the content for her business's new web site. Family photos. Letters. The general filing cabinet crap we all store on our computers and never look at but know is still there, somewhere, if we need it.

I walked by the neighborhood joint's parking lot yesterday. They hadn't even bothered to sweep up the shattered glass.
at March 01, 2009 No comments: